Bloomberg ranks the Copenhagen MBA among the top 20 in Europe: “I liked learning about the applicability of sustainability”

On 10 December 2019, Bloomberg Businessweek released its annual ranking of the best global business schools, revealing that the Copenhagen MBA ranks among the top 20 in Europe.

Every year, Corporate Knights recognises the world’s best business schools when it comes to educating leaders for a better world. The Copenhagen MBA yet again features among their top programmes.

The Full-time MBA's "pioneer class" from 2004 got together for a 10-year reunion in Copenhagen, where it all began. Classmates flew in from around the globe – coming from Iceland, China, Italy, Germany, Norway, USA, Romania, Latvia and Denmark. 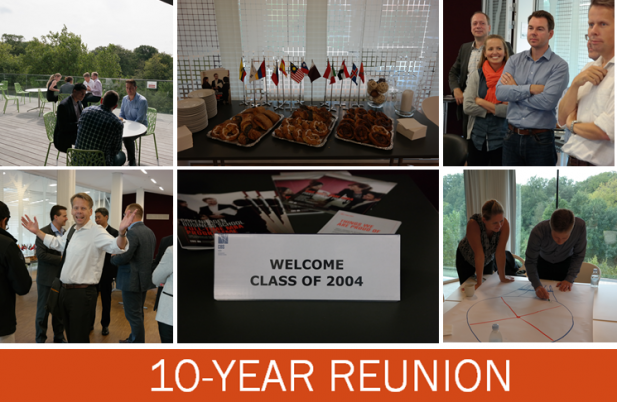 Over the weekend, the Full-time MBA programme’s first class, the class of 2004, got together for a 10-year reunion in Copenhagen, where it all began. 16 members of this 'pioneer class' attended, flying in from across the globe – coming from Iceland, China, Italy, Germany, Norway, USA, Romania, Latvia and around Denmark.

The weekend reunion began Friday morning at the CBS Executive building, where alumni enjoyed breakfast and catching up with one another, some of whom had not seen each other for 10 years. Former Head of CBS Executive and the founder of the CBS MBA, Claus Valentiner, led a session on goal setting and an activity where alumni drew out 5 year visions for the next phase of their careers and lives. Thomas Ritter, current marketing professor and former Full-time MBA Associate Dean, then led a session on competitiveness, incorporating case studies from Danish companies, bringing participants back to the good old days of the MBA classroom. Finn Junge Jensen, Former CBS President, was also in attendance.

The weekend continued with a mix of networking, fun and 'hygge' with a BBQ at one of the alumni’s homes and a dinner at Restaurant Koefoed. Staying true to the MBA programme’s style, the group also did some teambuilding with a visit to Klatreskoven, where they focused on collaboration, communication, and confidence in each other while participating in a variety of climbing activities.

The MBA alumni were happy to be together again, some having seen each other over the years but for some this was the first time since graduation. Jason Howard, an American living in Houston, said a group of them get together for a Danish “julefrokost” about every 2nd year, where roughly 15-20 of the 38 classmates manage to get together for a celebration.  “For my wedding 2 years ago, we had people fly in from Mexico and across Europe. We’ve stayed in relatively close contact over the years”, says Jason.

For others, they have not had the opportunity to see their classmates, so this weekend was the first time in many years they were together.  Runólfur Benediktsson flew in from Iceland and commented on seeing everyone again, “Reunions are common in some sense, people are a bit awkward in the beginning but quickly things are just like in the old days”.

Jens Sørensen, a native Dane described the experience as “emotional”. “The MBA is such an intense year, then you don’t see people for 10 years, and now you are back together again. It doesn’t see like 10 years has gone by! It’s nice to see the programme thriving, and to know you were a part of something that has grown and gotten even better, hopefully.” While sitting on the rooftop terrace enjoying lunch and sunshine, he also commented on Råvarebygningen, the facility where the MBA programme now takes place. “I would have loved to have spent a year here! I mean, where we were was nice, but this is luxury!”

Back at their MBA alma mater, the alumni also took some time to reflect on the past 10 years and how the programme has had an impact on their lives. Before starting the MBA, Runólfur was a financial manager of an IT company; now he is working in the Banking industry. “I work more internationally now. The MBA prevents you from hitting the glass-ceiling so to speak, it opens up possibilities.”

John Fang lives and works in China for the Danish company Sjølund. For him, one of the best things about the MBA was “the combination of a lot of series and putting them all together. Marketing, organisation, management. All those things linked together, that was most important for me.” John also has valued the internationality of the classroom. “Talking with classmates from different countries, the way they think is different from you. That’s also something you can learn from, that’s also something very nice.”

The full-time MBA from CBS has left a mark on this 'pioneer class' and has played a role in shaping not only their careers but their lives as a whole. “Where you choose to go to school and spend some time of course has knock-on effects and shapes the period afterward,” says Jason Howard.  “I ended up working with a firm that took me back to Scandinavia, I have a lot of friends here, and I ended up meeting my wife here. The decision to come to school at CBS took my life in a different direction than it would have if I had gone somewhere else.”