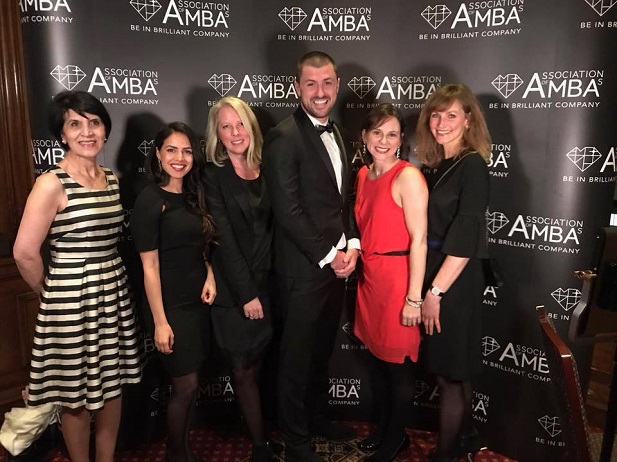 On 2 February 2018, Copenhagen MBA alumnus Jack Langworthy gracefully accepted the AMBA Entrepreneurial Venture Award in front of an audience of fellow MBA alumni and representatives from AMBA accredited business schools that had gathered in London for the occasion.

“When I attended Copenhagen Business School, I had no intention of starting my own business. But that's exactly what the Copenhagen MBA prepared me for,” said Jack Langworthy in an interview following his nomination.

Since graduating with an MBA from CBS in 2013, Jack Langworthy worked in IKEA’s Swedish headquarters before eventually making a go of his social venture. He set up NINAYO, an online marketplace that lets farmers and markets communicate easily with one another, with the ambitious goal to revolutionise agriculture in Tanzania and reduce food waste. In 2016, he left his job at IKEA to work full-time on NINAYO and today he splits his time between Silicon Valley and villages in East Africa. He even managed to collect a mention from former president Barack Obama in a speech en route to entrepreneurial success.

How does it feel to accept this award? What does it mean for you and NINAYO?

It was such a fun evening. I felt very grateful to the Copenhagen MBA for their nomination and support. Now NINAYO has a trophy and our competitors do not. And, while I recognize that in itself is of zero strategic value, it was a good moral boost for the whole team. Plus, the good press is already yielding contacts from high potential future partners and investors.

How can MBA’s contribute to making the world a better place?

Anyone trying to make a positive impact should pursue something that fulfills each of the following three categories:
1. They love it
2. It adds value
3. They are good at it

Looking at number three in particular, I would expect MBA’s to be better leaders. We have spent an unusual amount of hours contemplating topics such as supply chains, finance, marketing, strategy and organisational structures. Those are intimidating and seemingly dry topics, but essential for the success of any serious project to scale.

Where next for you and NINAYO?

I am excited that NINAYO is rolling out financial products for its users this year. Many of our users are unbanked and hence have no access to financial services. We are using our collection of user's commercial data to build financial products that will enable them to gain access to insurance and loans. Soon, we will announce a partnership with a cryptocurrency that will become game changing. East Africa has always been on the forefront of digital currency. The market opportunity for blockchain tech, particularly in finance, is huge here.

It looks like I will be spending more time with NINAYO in Tanzania than San Francisco this year. It’s very nice here in Tanzania - karibu MBAs!

And on that effective signoff note, we will leave Jack Langworthy to tend to his successful trade and look forward to following his endeavors and NINAYO’s growth in the future.