CBS has been competing in international business case competitions since 1998, winning its very first competition in 1999 at the University of Southern California’s Marshall Competition, known at the time as the Super Bowl of case competitions. To date, case competition teams from CBS have placed first in 20 case competitions, placed second 11 times, placed third 5 times, been finalists 10 times and have received 7 special awards, one of them for ‘best team coach’.

Two case coaches for CBS’ international teams plan the intense semester training, teach the teams the art of business analysis, run the teams through simulations of the competitions and organize workshops and presentations. This is done in close collaboration with some of the major consultancy firms in Denmark, many of them run by CBS alumni and themselves previous case competitors. This engagement in CBS is not individual, but corporate, making it one of CBS’ most dedicated and long standing business collaborations.

As a direct result of participation at the Dardin international case competition in the year 2000, two enthusiastic CBS students returned to CBS determined to start the best competition in the world at CBS. Since its inception in 2002, the CBSCC has become the school’s most important and popular annual event and one of the most sought undergraduate competitions in the world.

CBS is back on the undergraduate case competition world map after a 4 year absence. The CBS team’s impressive victory in the Australian Undergraduate Business Case Competition on December 2nd triggered an invitation to the Champions Trophy in New Zealand in February. 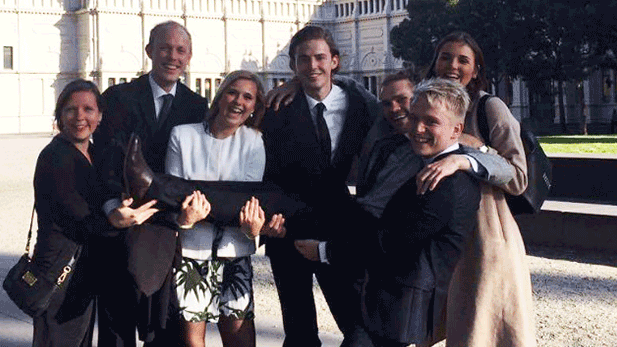 CBS’ national sport is the international business case competition. It has been so since 2002, when a team of volunteer CBS-students organized the first CBS Case Competition, which was also the first business school case competition for bachelor students in Europe.

As Australian Undergraduate Business Case Competition (along with CBS Case Competition) is one of the ‘big 12’ international case competitions, the victory also gave CBS an invitation to the Champions Trophy Case Competition, hosted by the University of Auckland Business School in New Zealand every year.

- It was really impressive, and I am so proud of them. This is the first actual international case competition, this team has competed in, and only one of the students has ever participated in a real one, case competition coach Caroline Krzton from CBS Business proudly points out and elaborates:

- The team was up against veteran case competition teams from some of the heavy hitter business schools like NUS in Singapore, Thammasat University in Thailand and University of British Columbia in Canada. We’re talking very experienced and intensely coached teams of elite students from elite business schools.

In comparison the CBS team had not had any structured training sessions since June, something that was made up for through a very intense, week long boot camp under Caroline Krzton and case alumni Theis Malmborg’s tutelage, where the 4 students sharpened their skills, leveled up considerably and knit together into a smooth and solid team.

Kids’ clothes-sharing and ‘ugly food’ supermarkets
The Australian Undergraduate Business Case Competition was split into a short, 3-hour Executive Summary heat, from which the CBS team also emerged as one of the 4 winners, followed by the long, 30-hour business case.

The focus of the Executive Summary was to make recommendations to the Melbourne City Council on how to develop shared economy initiatives targeting the city’s low income population. Here the CBS team came up with a web-based kids’ clothes rental initiative, winning their division.

The 30-hour case was all about retail with the 16 teams competing to suggest new business opportunities and growth potential for Australia-wide Coles Supermarkets, which in a Danish comparison would be placed somewhere between high-end Føtex and Irma, to counter the effect of a growing presence of discount competitors.

CBS’ team won the competition with its socially responsible recommendation for Coles to establish its own ‘ugly foods’ discount outlets, focusing on not only low price brands, but also on countering food and goods waste from Coles’ quality brands, selling goods with packaging faults or otherwise not living up to esthetic standards at huge discounts rather than just discarding them.

The Champions Trophy in Auckland, New Zealand
While winning the prestigious Australian Undergraduate Business Case Competition is a feat to be proud of in itself, the most exciting perspective is that it gives CBS the chance to compete in the global best-of-the-best business case competition, Champions Trophy.

The Champions Trophy Case Competition was started by the University of Auckland Business School with true Kiwi chutzpah. They held the first champions’ trophy in 2008, inviting the winners of the 11 most prestigious case competitions worldwide to compete against their home team. As nobody objected, Auckland Business School has hosted the case competition ‘Champions League’ ever since.