Seminar presenting the findings of the Swedish Infrastructure Commission

Seminar presenting the findings of the Swedish Infrastructure Commission

A Swedish Infrastructure Commission has been publishing its final report. The report makes recommendations for future infrastructure initiatives, including the potential use of public-private partnerships (PPPs). 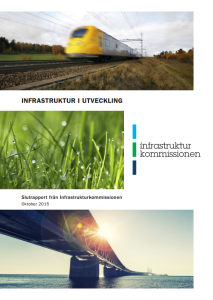 The Commission
The Commission began its work in March 2015 and was launched with the purpose to broaden the discussion on how transport infrastructure is financed, owned and organized in Sweden. The  Commission  has  especially  studied  alternatives  to  traditional  government funding with the goal of proposing solutions for how Sweden can obtain more and better infrastructure – faster than  today.  The  infrastructure  agenda  is  also  highly  debated  in Denmark, though we don’t have an established committee.

Thus will insight and learnings from the Swedish case also be beneficial to people working in the Danish system solving government  and  management  issues  concerning  building  and  handling  solid  transport infrastructure.

Read more about it all here.

Registration
Participation is free of charge and open to all interested. Sign up via email to publicprivateplatform@cbs.dk