A week ago a team of CBS students competed against schools like INSEAD (France), University of Oxford (UK) and Warwick Business School (UK) and was awarded second place at the International Business Ethics Case Competition (IBECC) in San Diego. Read the three graduate students’ story on their exciting journey 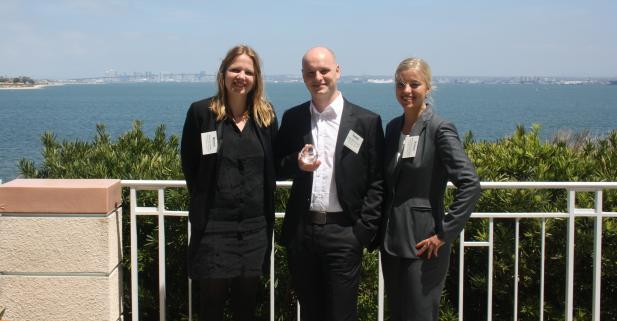 Lessons Learned on How to Win an Business Ethics Case Competition

- From the Classroom at CBS to the Boardroom in San Diego -

With business ethics at heart, IBECC is a unique and pioneering case competition. Of principal importance is the ability to convey the ethical dimensions of the problem and solution, both which had been selected by the competing teams before arrival. Hence with no time constraints IBECC gave us the opportunity to explore the ‘real world’ of management consulting, which led to an intensive and iterative preparation phase starting in the fall of 2012.

We embarked on our journey in November 2012, when we were given the opportunity to pitch for the CBS Sustainability Platform and Principles of Responsible Management Education (PRME) Office, who in collaboration had decided to support the representation of a team of CBS students at IBECC 2013. With our winning case on the Maersk Anti-Piracy in Somalia we initiated a research deep dive exploring all from employment of micro-level incentives structures using armed guards, the impact at meso-level management of port and shipping routes, and the dependency on macro-economic power relations in the international society – all to understand the problematic dynamics at play and the impact of our solution.

How to prevent Somaly piracy
Through various meetings and conferences with business experts, we quickly realized that if piracy should be solved, a victory at sea required supremacy on land. Somali piracy is a risky business – however a business. The main reason for individuals to become pirates is the clear lack of other opportunities – consider whether other criminals would take up the fight with an entire fleet of international navy vessels? Focused on creating an alternative to Somali piracy, we took a firm look at our case company's core competencies. Maersk Line is well known for sailing some of the biggest container ships in this world, however fewer are aware of the Maersk Group business units APM Terminals (constructing and managing ports) and Damco (completing the inland door-to-door services) as world leading companies in their respective fields. We discovered that by employing these units competencies to construct a deep-water port and manage import and export to the surrounding blooming markets in direct relation to the strategic and influenced route 'Daily Maersk', the root cause of piracy on land would be tackled and hence the piracy symptoms at sea would be addressed in an ethical manner. Earlier APM port investments in Africa had shown strong ripple effects with the creation of nearly 35.000 new jobs, training, and community building that likewise would benefit the Somali people, the newly IMF-recognized Somali government and the wider East-African Region. To put it simple, we made it clear that by doing business as usual Maersk Group could start a win-win solution for all relevant on land partners and hereby prevent piracy and protect their employees on sea.

Practice, practice, practice
The solution was formed, but once doing several case-runs with relevant professionals before departing to San Diego, it was clear that such a complex problem and solution in a fragile state required clear and persuasive communication. Hence, much of our preparation time was used rehearsing our story telling and line of argumentation. Especially this part of the process encouraged a steep learning curve and provided great material for thought for our future careers that took us from the classroom in CBS to the boardroom in San Diego.