Scientific Knowledge for society - via the LGBTQIA+ Pride

CBS utilizes Copenhagen 2021, this years’ exceptionally large and international WorldPride event, as a platform for the dissemination of new research, which among other things, will advance a diverse and inclusive culture in the workplace. 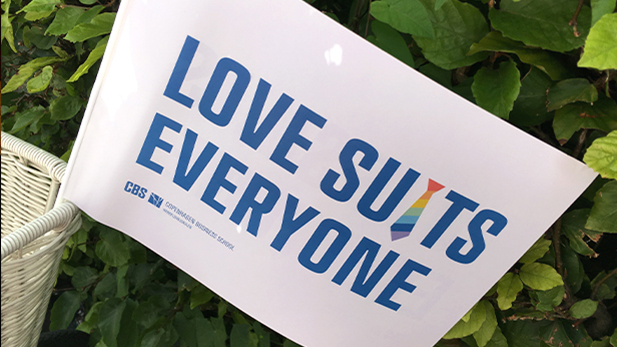 CBS partners with Copenhagen 2021 that makes WorldPride bigger than ever before and includes more scholarly forums than usually. And it is specifically this access to a weighty platform for the dissemination of new research on diversity in the workplace, which is key to CBS’ participation. Among other things, CBS contributes to the events 1:1 Democracy Festival and Workplace Inclusion Day, which are both part of the Human Rights Forum – Copenhagen 2021’s scholarly leg. At the same time, both students and staff will join in the traditional parade to celebrate the values CBS adheres to, also on a daily basis, in its capacity as an institution of education and research.

2021 is the fifth consecutive year – apart from 2020, when the event was cancelled due to Covid-19 restrictions – that CBS is a committed partner of the LGBTQIA+ event, which this year under the collective heading of “Copenhagen 2021” is bigger than ever. It combines WorldPride, EuroGames with 6,000 participating athletes, an artistic and cultural programme, a summit on migration in Malmö as well as a scholarly leg, the Human Rights Forum, which, among other things, includes 1:1 Democracy Festival and Workplace Inclusion Day.

CBS students and staff will participate in the traditional Pride Parade, this year transformed into six marches, and CBS researchers will contribute to a number of scholarly events. Professor Sara Louise Muhr from the Department of Organization, is a member of the Governing Board for the Human Rights Forum, and she will host the Workplace Inclusion Day, which renders her one of the main forces behind CBS’ commitment. But why is it even relevant for CBS to participate?

“It is an important platform in terms of presenting the diverse research we produce, which, among other things, can contribute to the advancement of a more diverse and inclusive culture in the workplace. At the same time, it provides an opportunity for our students and staff to collectively celebrate the values, we also comply with on an daily basis as an institution of education and research,” she says.

CBS is involved in Copenhagen 2021 on several fronts. Apart from Sara Louise Muhr’s engagements, Jannick Friis Christensen, Post.doc at the Department of Management, Politics and Philosophy, is also on the Governing Board for the Human Rights Forum, and on Workplace Inclusion Day, he will head a workshop focusing on greater inclusion of LGBTQIA+ people in the workplace. Furthermore, CBS is represented at the 1:1 Democracy Festival, where a research project headed by Associate Professor Stefan Schwarzkopf from the Department of Management, Politics and Philosophy examines how The Pride can promote inclusion in society in general and in the workplace.

Sara Louise Muhr stresses that LGBTQIA+ rights are under increasing pressure in many countries. This is not the case in a country like Denmark, where we have come a long way, but that does not mean that there is no room for improvements. There certainly is – not least in terms of creating greater inclusion in the workplace, she points out.

“Which is why we, at CBS, conduct targeted research from many angles on what organisations can concretely do to promote an agenda of equal opportunities and inclusion. And we are focused on how we, by way of our research, can assist businesses, organisations and decision-makers to help them fulfil their ambitions in terms of establishing a diverse culture.”

According to Sara Louise Muhr, it is a central, strategic goal for CBS to engage in these topics. And in terms of daily practices as an international institution of knowledge as well as in the research conducted and within the various educations on offer, staff and students strive to engage themselves in questions of diversity. It is imperative for CBS that the students carry these perspectives with them into their lives and careers. 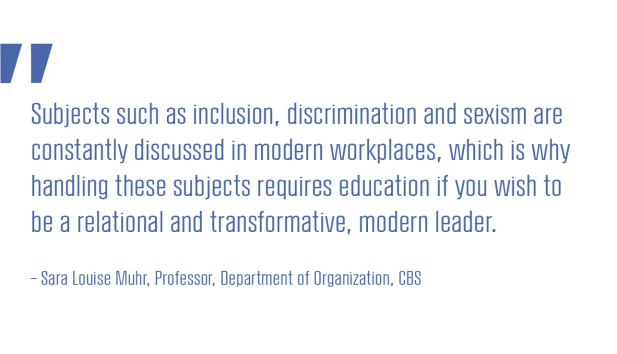 In addition to her research and teaching at CBS and being a member of the CBS Gender Balance Taskforce, Sara Louise Muhr is also the Academic Director for the university’s Diversity and Difference Platform. It is an interdisciplinary research initiative, which brings CBS researchers together and generates networks and partnerships with political decision-makers, business directors, NGOs as well as public organisations, both nationally and internationally.

The research, which is gathered under the wings of this platform, includes subjects such as organisational studies, diversity management, diversity in the workplace, migration and integration, gender and sexuality, education, culture and power. And some of the latest research will, as mentioned, be presented in various forums during Copenhagen 2021 – including at Workday Inclusion Day. And inclusion in the workplace is particularly relevant for several reasons, Sara Louise Muhr points out.

“If we cut to the bone, it is about you, if you’re not able, in the workplace, to be who you are as a human being, being less content and less productive. This is also true of LGBTQIA+ people who can feel forced to hide an important part of their identity in order to avoid conflicts. Workplace Inclusion Day is exactly focused on scholarly discussions on how to create a workplace, where everyone can be themselves.”

CBS’ workshop at Workplace Inclusion Day is a so-called QueerLab, which has been developed in a collaboration between CBS’s Diversity and Difference Platform and KVINFO. By combining a tightly controlled design thinking process and norm criticism, which will expand the participants’ understanding of the subject matter, a space will be established, where the participants themselves will develop solutions. The overall lab concept can be utilized in relation to all types of problems in the workplace, and they are freely accessible at CBS’ Diversity and Difference Platform.

Currently, CBS is rolling out a wide range of research focused on, among other things, discrimination, inclusion and harassment in the workplace. This includes research projects on the various challenges LGBTQIA+ people face on the job. For several years, Sara Louise Muhr has been following a transgendered leader, while also included her in the teaching at CBS as a lecturer. She also conducts research on how you can ensure that every talent is utilized within an organization, including LGBTQIA+ people. She emphasises that one of the main points is that you ensure this by creating a working culture, which is inclusive for everybody. If the working culture is not,  it encompasses exclusion mechanisms, by definition, that will make certain people unwilling or unable to work in the organisation.

Other current research projects look closer at the privilege of being “normal” as opposed to the challenges of belonging to a minority, whether it is another gender identity, ethnicity, sexual orientation or something else that deviates from the norm. But are Danish workplaces anno 2021 really challenged by a lack of inclusion?

“The short answer is yes, even though in the majority of organisations in Denmark they would say that of course, homosexuals and other minorities are more than welcome. However, it is – and I can say this based on my research and my personal experiences – practically always the case that people react to for instance a colleague, a collaborator or a teacher who belongs to a minority. And regardless of whether the reaction is positive or negative, it is a reaction that said person has to manage. So, it takes additional resources for the individual when on a daily basis colleagues and managers, for instance, relate to the fact that you fall outside the norm. In this way, working for greater inclusion may slightly paradoxically contribute to everyone focussing more on their work and less on their differences,” Sara Louise Muhr explains.

She also conducts research on how leaders can become better at not only handling diversity but at building a specific working culture that is diverse and widely inclusive, so that everybody wants to be in the workplace – which will also enable the utilization of all talents. Of course, this includes all the letters in LGBTQIA+, including transgendered people as well as the people who define as non-binary, that is, people with a fluid gender identity. Obviously, this research is also relevant internally at CBS, where over the last few years, there has been an increase in the number of students who identify as non-binary.

Taking your own medicine

In terms of teaching diversity and inclusion at CBS, the overall goal is to prepare tomorrow’s leaders for building a diverse working culture. However, currently, this teaching often becomes an appendix, which is addressed in one session or perhaps during a feature day. However, that is going to change, according to Sara Louise Muhr.

“Subjects such as inclusion, discrimination and sexism are constantly discussed in modern workplaces, which is why handling these subjects requires education if you wish to be a relational and transformative, modern leader focused on relations, inspiration and understanding your staff. Add to that how the increasingly borderless working life necessitates a greater and greater blending of private and working life, which means that you have to relate to your employees as ‘whole human beings’ – and this includes aspects that both adhere to the norm and those that don’t,” Sara Louise Muhr says.

Today, it is up to the individual teacher at CBS to ensure that the students are prepared for diversity management and able to generate an inclusive working culture. In actual fact, it is an activist endeavour. However, in the future it will become mandatory, she predicts.

“Within the framework of CBS’ Gender Balance Taskforce, we are making considerable headway with a process, the result of which will be a system that ensures that this will be incorporated into the teaching. At the same time, we are also looking at how we can create a model for the ‘inclusive classroom’, which we would like to roll out across CBS. So, we are not content with merely conducting research and communicating our results to the surrounding world – in the framework of Copenhagen 2021 and WorldPride, among other things. We also take our own medicine,” Sara Louise Muhr concludes.