The anthology, “Repetition, ambiguity and change: Structured leadership development and its effects” was published in June 2021 by Samfundslitteratur. 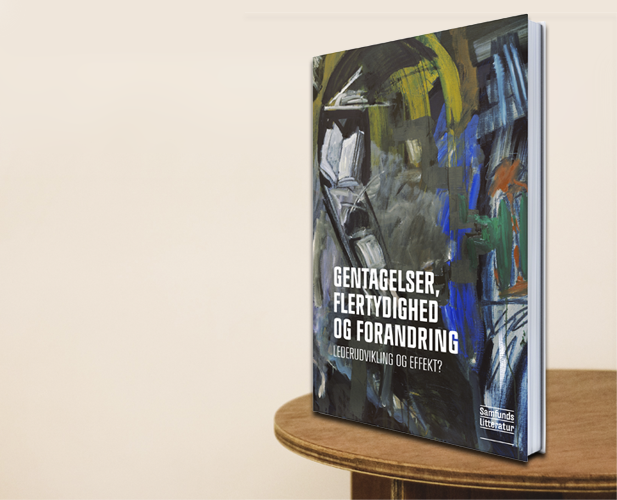 CBS’ Master of Management Development (MMD), with its focus on personal leadership since 2000, represents a unique alternative to the traditional MBA. The two prime movers behind the degree have published the book “Repetition, ambiguity and change: Structured leadership development and its effects”, which uncovers two decades of important experience on the development of personal leadership. Both the book and MMD confront the results-obsessed performance management approach that continues to play a totally dominant role in leadership circles.

“We started MMD because there was a clear need for an alternative to the MBA, which was and still is focused on a financial performance management mindset and is actually based on a critical, pessimistic view of human nature. It rests on the assumption that people are unproductive if you do not monitor them using key performance indicators and management goals.

We wanted to create a master’s programme based on a positive, trusting view of humanity,” explains Professor Jan Molin, who initiated MMD and has been the programme director throughout the years.

Jan Molin and Lise Balslev, programme manager of MMD since 2008, are responsible for the anthology, which they also edited and created under the same conditions that apply to the MMD.

The gift of ambiguity

“This means that as the book’s editors, we have control over the framework but not the content. Our starting point is that we believe that how people relate to their own practice improves their skills –and that only in this context does it make sense to talk about whether a management education has an effect or not,” clarifies Balslev, with Molin adding:

“Enterprises that focus on dollars and cents, where the investment in management education must result in economic outcomes, build on linear thinking – and that’s what both the book and MMD are confronting. We point out a different path and focus on the transformative effect of the many subtle details that arise when managers with an MMD, via their new insights and ways of acting, influence their employees and co-workers.”

Each of the seven cases in the book are the result of discussions between a professor and an MMD graduate on management challenges in the organisation where the graduate works. The initial conversation between the two was recorded by a journalist, after which the two engaged in another discussion based on what had been written down. At this point surprising new aspects and patterns emerged, providing important insights that confirm the basic underlying thinking of the MMD, explains Molin.

“When you return to something and take a hard look at it, you begin to see the variations and ambiguities. And once you’ve spotted the ambiguities, a larger space for development opens up. Then there will be room for change,” he asserts. 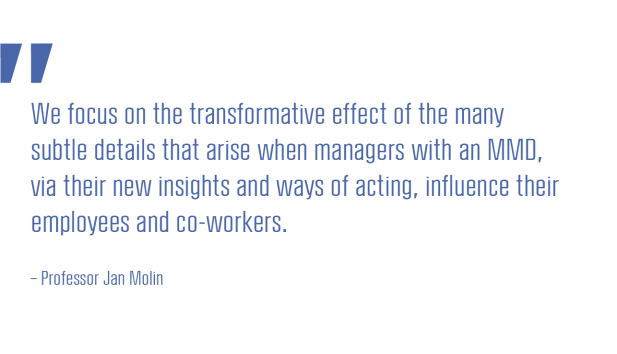 The MMD was established based on the experiences Molin had gained as a management researcher, instructor and programme director at CBS. He felt that the managers he was in contact with had good control over finances, operations and handling tasks, but that many of them were on thin ice in terms of making organisational processes work, such as creating a culture with meaningful relationships with co-workers and employees that provides both trust and respect, and an awareness that creating success is a joint endeavour. Moreover, the lack of management skills, according to Molin, is one good explanation.

“Most people’s careers are based on being an expert. On the way up the career ladder, they inherit employees they were not trained to handle, which means they are unaware of what to do with them. This is deeply problematic because we know that having meaningful relationships with others means everything to people,” he states.

Molin adds that the MMD was the first management degree at CBS to address the personal aspect of management work. More than twenty years later MMD stands relatively alone with this focus in Denmark and abroad. The financial and outcome-focused approach continues to wholly dominate management circles; however, Molin believes that there are signs of a budding tendency to go against this management thinking.

MMD is still, as far as known, the only master’s degree of its kind worldwide where the university controls the framework but not the content. MMD is divided into thematic blocks and boasts neither a curriculum nor subjects. The students, however, are exposed to a vast amount of complicated theory, which challenges them to see the world from other perspectives. At MMD you do not learn “about” management but develop as a leader in the relationship between theory and practice.

In addition, students must have both an external coach and a reflection partner from their class who they can rely on while taking their degree. They must also take part in a job exchange with another student for one week, just as they must do a 24-hour case exam at a specific company. While completing their degree they regularly face disruptions and roadblocks that put them in atypical situations wherein they can just barely tread water but can nonetheless breathe enough to develop their own management style in a process through which they learn by encountering themselves and one another. The reflection partner is important because getting further outside one’s comfort zone is often easier when there is a hand to hold, points out Balslev.

“The framework is fixed, as mentioned, but the students, in return, independently control how they will utilise the knowledge they acquire in their own management practice. We have chosen this approach because we know that being a leader is basically a question of becoming better at relationships, managing the setting–and leaving the content alone. But it is difficult for many people and requires new insights and training, which is what they get from us,” she says.

The manager as a management tool

Each semester concludes with an exam that requires students to demonstrate that they have most likely boosted their managerial skills, for example, through discussions with fellow students and teachers that have left an indelible mark. The aim is to train everyone to monitor their own development and to become better at understanding themselves and their own interactions with their surroundings. Various alumni from the tenth class to have graduated with an MMD mentioned precisely this aspect when they met in spring 2021 to take stock of what they had gained from the programme, states Balslev.

“Apart from the fact that they had become bolder leaders and were more in touch with their own values as a basis for leading others, they had also learned just how many different perspectives can exist in terms of one case. They said that the programme had made them more inclusive of others’ views and more open to asking their employees and co-workers questions. At the same time several of them mentioned that they had become better at using themselves as a management tool and at leading through relationships,” she concludes.