New benchmark tool can generate growth by way of innovation

CBS Professor is one of the main forces behind a new Innovation Benchmark tool, which can be accessed via Virksomhedsguiden.dk 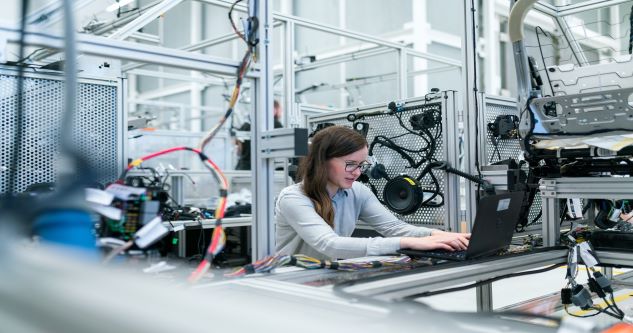 Alongside SDU and the Technological Institute, CBS is behind a new Innovation Benchmark tool, which is financed by The Danish Industry Foundation. The tool was launched in November 2021 and is aimed at small and medium-sized production companies, who will be able to gain clarity in terms of their level of innovation, among other things. It is also a useful point of departure in terms of reflection, dialogue and action within this field. The new tool meets an immense need in Denmark, where only just over half of the approximately 3,500 target-companies class themselves as innovative. And where the number of innovative companies is lower than in countries like Sweden, Finland, Norway, and Germany. This is problematic because innovative companies are a prerequisite for Denmark’s continued prosperity. The Innovation Benchmark tool can be accessed via Virksomhedsguiden.dk, which is affiliated with the Danish Business Authority.

CBS is one of the main forces behind a new Innovation Benchmark tool, which is aimed at small and medium-sized companies in Denmark. The purpose of the tool is to offer the companies unhindered access to self-reflection and inspiration as a point of departure for increased innovation. But is there truly a need for more innovation in small production companies in Denmark?

“Yes, absolutely,” Principal investigator of “Growth with Innovation” – the project behind the development of the tool – Anders Sørensen states. He is also Professor at the Department of Economics at CBS and head of CBS’ Centre for Innovation.

He explains how numbers from Statistics Denmark show that approximately half of the small and medium-sized production companies in Denmark class themselves as innovative, while the other half claims that they are not. At the same time, the overall number of innovative companies is lower in Denmark than in countries like Sweden, The Netherlands, Germany and France.

The innovation tool developed by CBS in collaboration with University of Southern Denmark (SDU) and the Technological Institute builds on knowledge about companies’ innovation, which has been gathered by way of phone interviews. The project’s partakers have called all of the approximately 3,500 small and medium-sized production companies with 10-250 employees and asked them to answer questions that are also included in the new Innovation Benchmark tool.
“A little under 2,000 companies chose to participate and their answers make up the basis for comparison, which users of the tool will be weighed against. To ensure that the basis is constantly up-to-date, we will repeat the interviews regularly – next time will be in 2022,” Anders Sørensen says before he explains that the tool also offers a number of case studies that zoom in on concrete innovation challenges that companies have faced and information on how they subsequently handled them. This enables users to learn from other companies’ experiences.

- Anders Sørensen, Professor at the Department of Economics at CBS

INNOVATION ACROSS THE BOARD

According to Anders Sørensen, answering the 20 questions in the newly developed tool does not take long. When the questions related to products, processes, organisation and marketing have been answered, the company will, among other things, be presented with an overview of the combined innovation approach, including potentials for improvements. Furthermore, reports can be extracted from each area, which, among other things, will also reveal the level of innovation in relation to comparable companies.

Production innovation concerns the development of completely new products or better and smarter versions of already existing products. Process innovation typically concerns the automatization by way of technology, where you will be able to make processes related to, for instance, manufacturing and inventory more effective and thus better and cheaper.

In terms of organisations, innovation can, for example, relate to the delegation of decision competences to employees, as companies with top-down structures often experience problems with a lack of efficiency and bottlenecks because employees continually await approval or feedback from a few key managers. And finally, innovation in marketing will often concern the development of new marketing and sales channels, which effectively connect a company with its customers. By way of example, this could include rethinking the design and packaging of products, launching a new web shop or utilising social media in new ways.

CBS’ research in connection with the development of the tool has, among other things, shown what companies can expect from practicing innovation. And here it is very clear that innovative companies who intensively employ workers with a higher education rapidly increase their productivity, and make more money per employee when compared to those companies who are not innovative. At the same time, innovative companies also have a higher market share, and they grow faster when measured against added value.

“In companies with a high number of employees with a higher education, you typically see a higher degree of innovation, while companies with few or none of those employees innovate much less or not at all. This also means that the companies in the latter category should not engage in big innovation projects without firstly ensuring that the prerequisites in the shape of relevant and required competences are in place. Reversely, they should start sooner rather than later, if they have the competences, but seem unable to remove their foot from the innovation brake,” Anders Sørensen elaborates.

He also points to situations where a company presumes that they are very innovative, only this is contradicted by the results generated by the tool. Reversely, you may also believe that you are doing really badly in terms of innovation, while in reality, you are quite cutting edge. Regardless of your results, you will be able to gain more clarity in terms of where your company is placed along the innovation ladder: how far you have come internally, and where you are in relation to other comparable companies. The tool also provides concrete suggestions to what you can gain by initiating innovation or increasing innovation activities in terms of profit per employee – compared to the status quo situation.

“And all in all, this knowledge is a particularly useful point of departure for reflection, dialogue and action,” Anders Sørensen states.

He adds that answering the questions in collaboration with an advisor can be to your advantage as they will be able to go through the results and then enter into a dialogue about how to improve matters as you move forward. It may also be advantageous for management or board members to answer the questions independently of each other, after which their possibly differing perceptions may act as a point of departure for a constructive dialogue.

The new innovation tool, which is supported by The Danish Industry Foundation, can be found on the website, Virksomhedsguiden.dk. Virksomhedsguiden is an online platform, operated by Danish Busineness Authority, that promotes entrepreneurship and business in Denmark. The platform is a short-cut to comprensive and useful information for Danish businesses with growth potential. It also provides an overview of events, networks i.e that are accessible in your local area. On the platform, you can also find help and contact information from the Danish Business Hubs (“Erhvervshuse” in Danish), who can provide free sparring for companies that have questions regarding the Innovation Benchmark tool.

WANT TO KNOW MORE?
You will find the new Innovation Benchmark tool via Virksomhedsguiden.dk. This is a direct link

Please also contact Anders Sørensen, Principal investigator of “Growth with Innovation” and Professor at the Department of Economics at CBS and head of CBS’ Center for Innovation at: as.eco@cbs.dk.