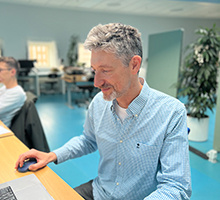 He is a pioneering researcher and educator in the field of online/internet business, specialising in open technologies and the digital transformation of organisations and society. He is the author of ‘Digital Entrepreneurship’ and ‘Technology and Inequality: Concentrated Wealth in a Digital World’.

A chain of historical events made the technology empire Silicon Valley, but inflation and investors holding back pose a threat to the empire. Is Rome about to fall? We are looking to history for answers.

There is a crisis in Silicon Valley.

Inflation has made interest rates go up, investors are holding back, and Amazon, Meta, Google and Twitter are laying off tens of thousands of employees. And did we mention that Tesla shares are sent into a free fall?

The US tech industry is in a new situation. Earlier, the tech companies in the small valley in northern Californiahave benefited from an almost infinite faith from investors and private equity funds. And this optimism has not been unfounded:

As you may have noticed, American tech companies have for the past two decades created internet commerce, search engines, social media and basically all our streaming services. They made the electric car mainstream, and the constantly growing digital world was put into our pockets in the form of smartphones.

In exchange for these promising future visions, Silicon Valley amassed vast riches. In 2016, almost half of US venture capital was invested in Silicon Valley. If California were a country, its GDP would be the fifth largest of the world right behind Germany and before India.

This is to a large extent because Silicon Valley were trailblazers when the internet became available to everyone, but how did they do it – and is everybody else gaining on them?

”Many different, independent and – if I am being completely honest – coincidental events in history have made Silicon Valley the technology capital of the world, even long before the internet. One of the most conspicuous factors behind Silicon Valley’s success is their working culture, and that tradition emerged long before the internet,” says J.P. Allen, Professor at the University of San Francisco and former visiting professor at the Department of Digitalization at CBS.

First and foremost, already before the First World War, the American navy had a large base in San Francisco doing research on radio technology. Naturally, manufacturers were curious about this, however, the Californian tech industry really started to move when the Nobel laureate and inventor of the transistor, William Shockley, moved to the state and started a company that developed and manufactured semiconductors.

He convinced some of the world’s best researchers to come to California to work for his company, however, Shockley's abilities as a leader and a co-worker were not the best, and when he fell out with his employees, they left the company and started their own: Fairchild Semiconductors.

But back then, breaking with management in a company and starting your own business was unheard of, for which reason they were named ‘The Traitorous Eight’.

“This was very unusual and unprecedented in the tech industry. At that time, it was normal to work for the same company for many years and often throughout your career. But the fact that these eight employees broke out of the company to start their own decided the success of Silicon Valley. It started a culture in which it was no longer frowned on to leave companies to pursue your own ideas. On the contrary, this was idolised later on.” 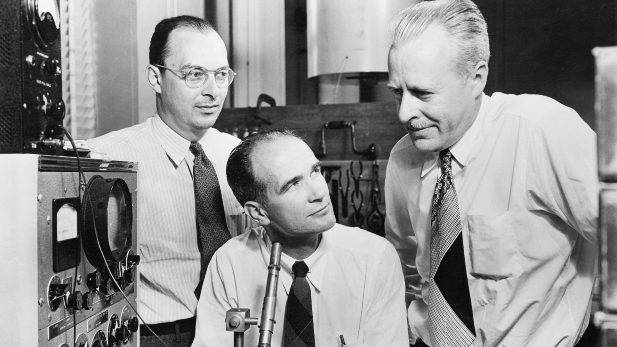 From the left here is Bardeen, Shockley and Brattain, all of whom won The Nobel Prize in Physics in 1956 for their invention of the transistor. The picture is from their time as colleagues at Bell Labs. Photo: AT&T/Jack St./Wikimedia Commons.

In other words, the actions of the Traitorous Eight started the working culture Silicon Valley is known for today, where employees also have projects on the side, only work at the same place for a short period of time and start business after business.

You could compare the development of Silicon Valley with the way evolution works.

”In many ways the process resembles evolution. Mutations create new genes which may be favourable and survive while others disappear. In Silicon Valley, you can say that the working culture facilitated a much faster adaptation of the genes to the need than elsewhere. So, this is a leap from a linear to an exponential development,” says J. P. Allen.

Allegedly, William Shockley moved back to California to live closer to his mother. But perhaps he had ulterior motives starting his company in that exact place.

In New Jersey, he probably could not have continued to work on the projects he started at Bell Labs, but he was able to in California. In many states it was not unusual for big companies to be very secretive in terms of development, and they often made new employees sign a so-called non-compete agreement, which, for instance, could include restrictive covenants prohibiting employees to work within the same industry for two years after leaving the company.

But these kinds of agreements were and are illegal in California.

”This is one of the coincidences which have benefited the rise of Silicon Valley enormously, as old law in California bans these agreements. Certainly, its significance could not have been predicted because it is from 1872, where it probably was adopted by a judge wearing a top hat,” says Jonathan P. Allen.

(The man behind this act was David Dudley Field II, but we have not been able to confirm whether he wore a top hat)

A third precondition for the prosperity of Silicon Valley was a particularly ambitious dean at the Stanford University School of Engineering.

Already before the success of Fairchild Semiconductors Frederick Terman held a grudge against the flourishing tech industry of the east coast, which included IBM in New York and Bell Labs in New Jersey, where William Shockley worked before he came to California.

The west coast was not as advanced, but Frederick Terman was determined to change that. At that time, Stanford University was far from one of the most recognised universities, but Terman had a vision to make Stanford University and California leading in technology, so he encouraged his students to start their own companies. In 1951, he rented Stanford Industrial Park, where the university rented out lots for this exact purpose. Companies such as Hewlett-Packard, General Electric and Eastman Kodak started here.

Today, 30 of USA’s 1000 largest companies have their headquarters in Silicon Valley, and Stanford University is considered one of the third most recognised universities in the world.

The last precondition for Silicon Valley’s growth in this article is maybe also the one that has caused them problems lately. Because Silicon Valley made it mainstream to apply for venture capital, which is a type of financing that investors provide to start-up companies. You may know this concept from the TV show ‘Dragons’ Den’.

When the internet started to gain ground, and investors saw its huge potential, they simply realised that the risk of not getting in the game was far greater than taking the risk.

This created an environment where it was possible to start a company without being rich or taking up expensive bank loans. And this really boosted development in Silicon Valley, where employees started quitting their jobs and asking for money even though the only thing they had was a great idea.

However, today, where fewer people are willing to invest, many of the niches of the internet have been found and inflation is raising interest rates, it has become difficult to apply for venture capital, also in Silicon Valley.

”Venture capital funding, new deals, and exits (sales of companies to investors) are all down. However, a lot of money has been raised that needs to be invested eventually, but people are waiting to see how deep this upcoming recession will be. Tech is not unique in that, but there is definitely more discretion in timing of investments. At the top of the food chain, the big tech powers still have massive cash positions, a good cash flow, and they can still swallow acquisitions like $ 70 billion for Activision Blizzard without breaking a sweat,” says J.P. Allen.

”Silicon Valley is definitely facing short-term challenges. One indicator is layoffs, though data suggests so far that most of the layoffs are returning employment to numbers before the pandemic hiring explosion in tech and are happening away from Silicon Valley. So far, actual tech talent, as opposed to support/overhead jobs, has not had too many problems finding new positions,” says J.P.  Allen.

This also aligns with the response of Marc Benioff, CEO of Salesforce, who told CNN that the numerous layoffs were a result of a recklessness following the pandemic's increased traffic and internet commerce.

“As our revenue accelerated through the pandemic, we hired too many people leading into this economic downturn we’re now facing, and I take responsibility for that,” he recently told CNN Business.

”Twitter is in total chaos” – but is Silicon Valley under serious threat?

But what about social media such as Meta and Twitter, can their business models handle the current crisis?

According to Chandler Nguyen, Google Global Vice President, Meta’s advertising revenue appear to be decreasing in the next couple of years. This is probably because companies tend to minimise their advertising expenses in times of crisis.

Simultaneously, Elon Musk taking over Twitter has led to mass layoffs and many new controversial initiatives on the platform.

“Twitter is in total chaos as you know. Classical social media like Facebook is transitioning to slow growth in the core advertising model, but others like Snapchat and ByteDance (who owns TikTok) are not doing too badly on the ad front. There is an eagerness to explore service sales, but maybe social media will transition more to messaging in addition to the storefronts they have been trying to push for a while,” says J.P. Allen.

So, what is the conclusion – is Silicon Valley under serious threat?

“The bottom line for me: It is at the end of a boom cycle, but it is not a 'crisis' yet unless recession lasts more than a year and actual Research & Development expenses and Mergers & Acquisitions activity go permanently down, which I cannot see yet.”