The Pension Research Centre, PeRCent, was established at the Department of Economics at CBS in 2015 in collaboration with the Danish pension industry. The PeRCent faculty teaches and conducts research on pension with the aim to contribute to the development of robust pension systems in Denmark and the rest of the world.

The book ‘The Danish Pension System: Design, Performance and Challenges’ has recently been published at the Oxford University Press. It provides a general view of the development and structures of the Danish pension system and analyses the challenges the system is facing in depth. The book is edited by the heads of PeRCent, professors Jesper Rangvid and Svend Erik Hougaard Jensen and Torben M. Andersen, Chair of the research centre advisory board and Professor at Aarhus University.

Embed the Arne pension and develop new incentives for Svend 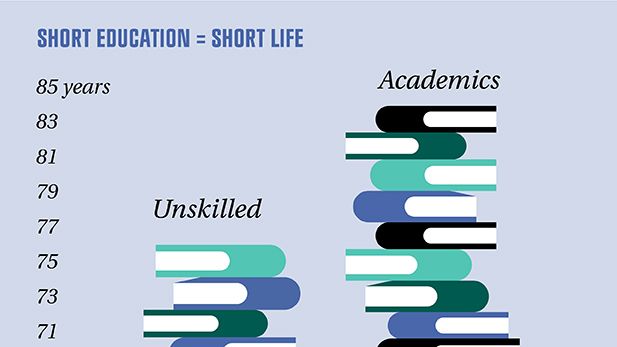 The life expectancy for unskilled workers is 7.6 years shorter than for academics.
For women, the difference is 5.8 years.

Denmark has one of the world’s best pension systems which secures a large part of elderly people against poverty while being economically sustainable.

Even so, the pension system should be further developed after the Danish parliament election, says Professor Svend Erik Hougaard Jensen, Director for the Pension Research Centre at CBS (PeRCent).

”Politicians seriously have to address the inequality of early school leavers having a shorter retirement because they die earlier than the highly educated,” he says.

”The Danish Arne pension somewhat redresses this inequality, however, it is based on a very slender majority. We need a broad political agreement on the right to early retirement. This is the only way the Danes can trust that Denmark wishes to address the pension inequality owing to differences in life expectancy which are related to the duration of education and social background,” he says.

”Eight years. That is a long time”
The inequality is largest among men. An unskilled 30-year-old male may expect to live until he is 76.1 years old, while an academic of the same age has a life expectancy of 83.7 years.

”For men, that is a difference of almost eight years. Think about it! Eight years. That is a long time,” says Hougaard Jensen.

For women, the difference is 5.8 years. Women who only has a basic general education reaches an average age of 80.5, while women with a university degree reaches an age of 86.

Some people just have to be allowed to leave the labour market earlier than others if we are to secure the population's continued support for the Danish pension model.

Hougaard Jensen’s call for a broad political agreement on early retirement is based on the knowledge that you cannot rely completely on pension systems unless they are being backed by the entire political centre and are trusted by influential society actors such as the two sides of industry.

Because with a broadly supported agreement, the pension system will not be changed by a new government.

Increasing support for early retirement
So, when the Arne pension scheme was adopted in 2020 with a slender majority by the Social Democrats, Socialist People's Party, Red-Green Alliance and the Danish People's Party, the reform did not appear too solid. The scheme allows people who have been at least 42 years on the labour market to retire early, up to three years before the state pension age.

In 2022, the Liberal Party of Denmark and the Denmark Democrats have also started to back the Arne pension. The Danish Social Liberal Party have also signalled that their previous resistance to the scheme will not hinder them in supporting a new government.

”Therefore, we can conclude that the right to early retirement has become an integral part of the Danish pension system. And I applaud this, because some people just have to be allowed to leave the labour market earlier than others if we are to secure the population's continued support for the Danish pension model,” says Svend Erik Hougaard Jensen.

”The political parties would send a powerful signal if they made a broad political agreement with a right to early retirement,” says Svend Erik Hougaard Jensen.

Whether the solution is to continue the Arne pension, further develop the senior pension or doing something else is not crucial, he finds. The senior pension scheme, which was initiated by the parties of the right and became a reality in 2019, can be applied for if you have reduced working capacity.

”What matters is that the scheme targets exactly those people – they have been on the labour market for a very long time and they do have a shorter life expectancy. They are typically people with a short education who will not enjoy their retirement for a very long time even though they have saved up for their pension their entire worklife,” he says.

Commission: Curb the increasing retirement age
Politicians can be inspired to revise the pension system by the Danish ‘Commission on retirement and wearing-down’, which was established by six political parties in 2020 to examine whether the system was balanced properly.

In May 2022, the commission suggested curbing the increasing retirement age which was agreed by the political middle in the so-called ‘Welfare agreement’ in 2006.

However, according to the commission, it does not have to happen that fast, and Hougaard Jensen agrees:

Increasing retirement age is crucial for the economy
”The welfare agreement is an essential contribution to our strong Danish economy. However, this big retirement gap depending on your socio-economic group is quite a challenge here in 2022. The commission’s proposal is one way to ensure a longer retirement period for the unskilled workers,” he says.

The commission recommends that the retirement age increases by six months when the average life expectancy increases by one year, which is half of the current growth rate.

We need to focus on how we get the highly educated to stay on the labour market.

According to Svend Erik Hougaard Jensen, it is a satisfactory solution. But he encourages politicians to supplement it with revisions of the pension system at both ends of old age.

The welfare agreement is the supporting structure of our pension system, but today there is a need to reinforce it with new broad agreements. At one end of old age, unskilled workers should be entitled to early retirement. At the other end, we should build incentive structures to keep the highly educated on the labour market,” he says.

A new focus on staying on the labour market
“So, now we have Arne, who has a shorter life expectancy. But we also have Svend. Svend bicycles 6,000 km per year, he only eats organic food and tries to keep his beer consumption in check although he loves beer from microbreweries. He could still be perfectly capable of giving a very nice lecture at CBS at the age of 89,” Hougaard Jensen smiles.

”If more of us are offered incentives to work longer, there will be a larger labour supply and a continued healthy economy in the years to come. The challenge is that we become older, and the working age population will decrease.

One of the incentives could be tax advantages, but more incentives should be added, says Svend Erik Hougaard Jensen:

”Until now, we have focused on how to provide those with the shortest education the opportunity to retire earlier. So, now when it looks like we have arrived at a consensus, we need to focus on how we get the highly educated to stay on the labour market.”

The average life expectancy in Denmark is almost 80 years for men and more than 83 years for women. There is a lot of variation behind this average, the shorter the education, the shorter the life. The average life expectancy for 30-year-old unskilled workers is 7.6 years shorter than for the highly educated. For women, the difference is 5.8 years. Still, the Danish retirement age is adjusted upwards in line with the general age increase of the population. In 2022, the retirement age is 67, whereas it will be 70 years in 2040. By then, the group of unskilled men will have six years of retirement and the highly educated 14 years, unless the rules are changed or habits or life expectancy change. 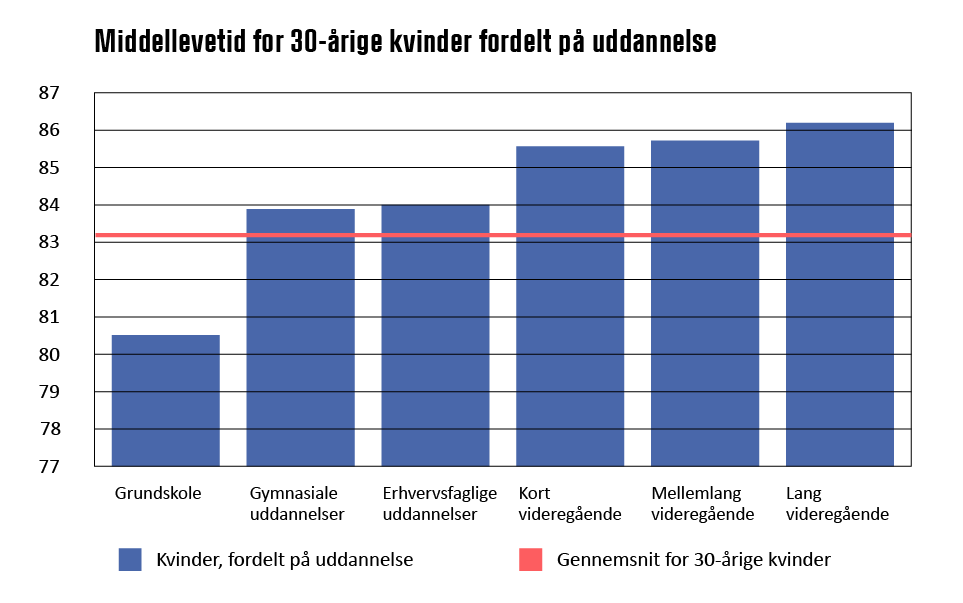 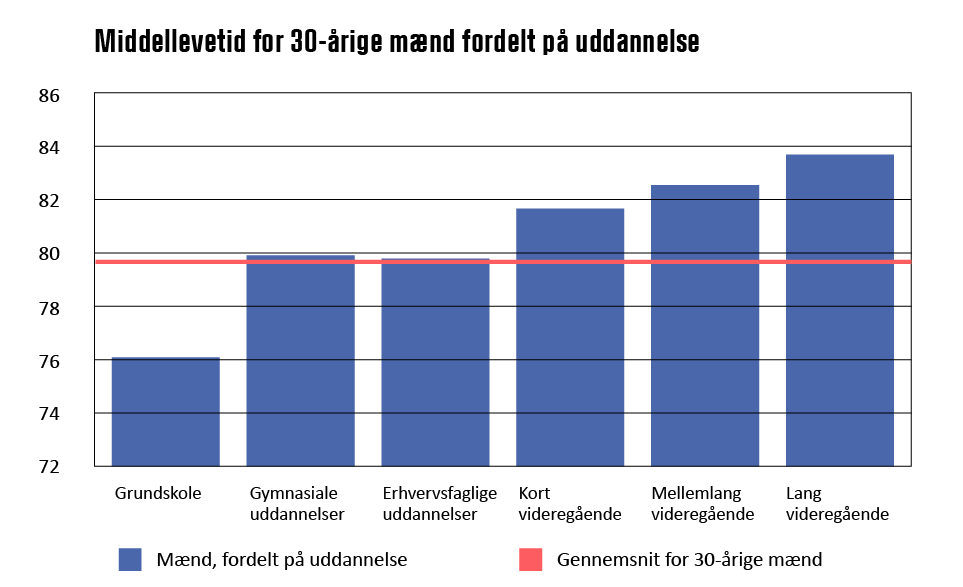