“My research will highlight the patterns that enable sexual harassment”

What can be done about a problem rooted in structures and cultures? We can begin by understanding its conditions. So says Bontu Lucie Guschke, who is a PhD student at CBS. Back in November, she won the Fonnesbæk PhD Prize for her research on harassment and discrimination in organisations. 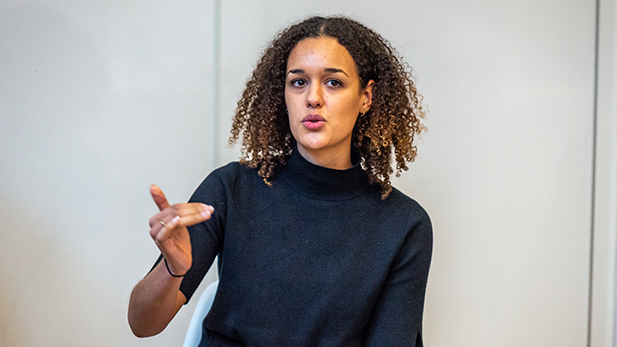 Sexual harassment and discrimination are subjects widely debated in society, and even though media coverage is highly focused on the media industry and the world of politics, the problem is prevalent in many Danish workplaces.

And this is exactly what Bontu Lucie Guschke wishes to root out. She is a PhD student at the Department of Organization at CBS and last year’s winner of the “Fonnesbæk PhD Prize” which was awarded at the annual prize ceremony on November 3rd, 2021. The prize is awarded to a PhD student who has produced extraordinary research and is considered to be at the top level internationally.

With the prize, Bontu Lucie Guschke will be able to finance another year’s research for her PhD on sexual harassment and discrimination in organisations. More specifically, she investigates how the phenomenon can be understood and where it takes place. She hopes to be able to develop a method of how best to deal with sexual harassment.

Surprise at comparison between universities and army

Early on in Bontu Lucie Guschke’s study, it was clear that sexual harassment springs form structures rather than individuals, and that these structures exist in various types of organisations and industries, including universities.

“We saw an ocean of similarities in our results, despite the big differences between the organisations. We started thinking about what could be gained from thoroughly analysing our data through a shared lens. We found that it were the same things that enabled sexual harassment in the two organisations,” Bontu Lucie Guschke explains.

By comparing their data, they could see that one significant reason for harassment is organisational inconsistencies. At universities and in the army, there are many formal rules and processes that any new member of these organisations is expected to learn. This is also the case with sexual harassment, where there are procedures on how to report it. However, alongside the formal rules, there are as many informal expectations and norms related to the solving of conflicts and problems such as, for instance, sexual abuse.

This means that when an employee or students is exposed to sexual harassment, there is both a formal and an informal way of handling it, and these will often be conflicting, Bontu Lucie Guschke explains and then elaborates:

If you choose to report sexual harassment through official channels, you will most likely experience that this goes against the informal learning of how to be a good colleague. Reversely, if you choose the informal channels and merely bring it up rather than reporting it, you risk not being taken seriously. Because if it was a serious problem, surely, you would report it.

Bontu Lucie Guschke has always been interested in discrimination and injustice. Alongside her BA studies, which she completed in Berlin, Germany, she worked with refugees, and through this work, she became aware of the challenges, refugees face, when they arrive in Europe.

“On a personal level, I have always been very concerned about inequality and injustice. When I started at CBS, my interest in sexism, racism and inequality related to universities was awakened,” she says and continues:

“I find it an interesting frame, because there are many different perspectives in a university. There is the teaching and the students, and then there is the research and the university as a workplace,” Bontu Lucie Guschke explains. She has studied harassment among both students and staff.

To Bontu Lucie Guschke is it quite obvious that there is no quick fix when combatting harassment and sexism. On the contrary, it requires long-term cultural changes.

Both racism and sexism are so deeply rooted in our society and our organisations that there is no one tool or toolbox that will fix everything. Changing structures and organisational norms requires long-term processes,

And yet, she points to a few concrete tools, organisations or companies can use to their advantage. One of them is a new handbook, which addresses how to understand and work with sexism.

The book was written on the basis of a petition signed by approximately 700 researchers and 900 personal testimonials on sexist behaviour in academia. It can be downloaded for free.

“The book is a great toolbox, with very concrete workshop ideas and methods on how to start the very difficult conversations, which we must have, if we are to solve the problems in a better way. It is a great way of discussing some of the grey area-dilemmas,” Bontu Lucie Guschke elaborates.

Wants to bring the conversation out into society at large

As the winner of the Fonnesbæk PhD Prize, she will be able to spend another year on her PhD project. Concretely, this means that she can spend more time on communicating her research outside of her own field, and this is central to the young researcher.

In continuation of her PhD, Bontu Lucie Guschke is also involved in several initiatives that help companies and organisations combat harassment and discrimination.

One of the initiatives is GenderLAB, a collaboration between a group of CBS researchers and KVINFO.

She is also part of the CBS platform Diversity and Difference, working to promote and communicate research on diversity and gender in workplaces.

I am very grateful and happy to have won this prize. It shows that CBS supports research on feminism and racism at a time when feminism – and gender studies – are under constant attack. I hope that CBS will continue to support and strengthen this research,

Read more about Bontu Lucie Guschke and her research here.