Massive online open courses, which became a phenomenon in 2012, have also been created by the Technical University of Denmark and the University of Copenhagen, and universities abroad such as Yale and Princeton have also done MOOCs. The largest MOOCs have had around 100,000 registered participants.

Over the last two years CBS has focused on developing massive open online courses, or MOOCs, which has recently led to CBS winning a competition to offer a number of courses on Coursera, the world’s largest MOOC site. The people behind CBS’ courses are convinced that MOOCs are particularly relevant for alumni. 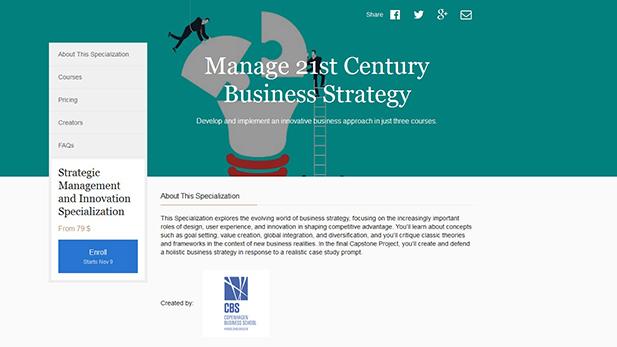 When was the last time you took a course with a dramatic trailer showing the protagonist facing difficult challenges? If the answer is never, then it’s because you’ve never taken the course Leadership in 21st Century Organizations.

If you’re curious about this kind of film, check it out:

Originally, the course was offered at CBS and developed by Professor Robert Austin and Assistant Professor Shannon Hessel, but is now also being offered as a MOOC.

These open courses take place online, are free of charge and are open to people worldwide, which means they can attract thousands of people participating via their computers and gaining new knowledge through video lectures, assignments and online exchange of experience

Learning by watching and doing
Austin helped develop two MOOCs at CBS, experimenting with the format in both of them.

- Leadership in 21st Century Organizations is based on a book I wrote with Shannon Hessel, who has a background in theatre. That’s why we had professional actors play the scenes from the book, says Austin.

Course participants follow fictitious character Jim Barton, the CEO of a large company. During the course, Barton faces a variety of challenges that bring the topics of the course to life.

- He has problems, makes mistakes and tries to do new things. The students can critique his actions online, and in order to help them with that we also post lectures and readings relevant to the situation in question. But our point is also that, to a large degree, management involves being able to judge things. We have to admit that theory can’t take you the entire way and that the manager’s personal style also has to come into play, explains Austin.

Not a cash cow
For the past two years CBS has focused on developing MOOCs as part of its strategic effort to strengthen the use of IT in teaching. And that venture recently paid off when CBS was chosen to do a so-called ’specialisation’, which is Coursera's most recent initiative. Specialisations are a specific series of courses offered in areas such as business and programming which, when taken as a whole, can earn students a diploma.

Annemette Kjærgaard, the Associate Dean for Learning at CBS, has been tasked with merging new technology with professional development and teaching. She stresses that CBS’ commitment to MOOCs is a development project and not a cash cow.

- The purpose of our MOOCs continually changes. Partially, they are a way of showing students and the rest of the world what CBS can do and does differently. Our work with MOOCs also adds tremendous value to the digital teaching we provide students at CBS, clarifies Kjærgaard.

- Our MOOCs allow us to test ideas on a huge market and we can compare ourselves with the competition on the world stage. But they also benefit our online courses for our own students because we can use what successfully works in our MOOCS in our teaching.

Kjærgaard explains that MOOCs in general are still evolving and that there is not, as yet, a tried and true approach for how to best present courses. The large number of students who have free access to learning is a fantastic aspect of MOOCs, but having thousands of students participating in a course also represents new challenges.

- It’s impossible to know what qualifications the 10,000 participants have, which means tuning into such a broad group can be difficult. The next step will perhaps be to consider whether designating uniform subgroups in the large courses is possible, states Kjærgaard.

Flexible option for alumni
Head of CBS Learning Technologies Jakob Ravn is in charge of the practical side of creating and administrating CBS’ MOOCs. He’s convinced that MOOCs are an obvious choice for CBS alumni.

- It’s high quality education available free of charge. Our courses and other people’s courses clearly have professional relevance for CBS alumni. Time wise, the flexibility MOOCs offer means they are well-suited for busy people who don’t have time to be in a specific place at a specific time in their daily lives, comments Ravn.

He says that the Massachusetts Institute of Technology has used MOOCs as a qualification for a Master’s degree and that some universities already use them as part of their Master’s programmes.

- A tremendous amount of experimentation is going on regarding the interplay between paid and free courses, the latter of which do not yet give credit in Denmark. We’ll most definitely also end up experimenting with this and perhaps some of the certified continuing education courses now being offered will be available more flexibly on line, adds Ravn.

- Future prospects for MOOCs involve finding out what works best online and what is best to do in the classroom. For many years class time has been spent on conveying information. But in the future we may pass on information using videos and then have instructors spend more time in dialogue with the students, states Austin.

Read Robert Austin’s interview in the Financial Times on the course Leadership in 21st Century Organizations.