Has worked at, among others, Viasat and TDC as well as helped start two companies

Two CBS alumni with top-ranking jobs at Google and eBay talk about today’s most prominent digital trends. Read what Google’s Country Manager Nordics, SMB Sales, Peter Scharff has to say about trends, how he got the job and what it’s like to work at Google. 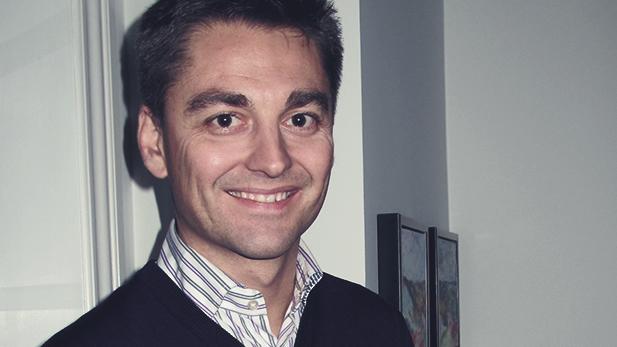 It hardly comes as a surprise that Google is on the go. Even though the pace is high within the company, it’s the customers’ speed that is the most important, explains Peter Scharff. He is Google’s Country Manager Nordics for sales to small and medium-sized businesses (SMB) in the Nordic region and is currently stationed at Google’s European headquarters in Dublin.

- Basically, if companies want to be successful, they need to be faster at adopting new technology and development than the speed at which users change. And right now companies are being pressured by the furious pace at which customers change, says Scharff.

Two guys in a garage
Recently, while participating in an event at CBS on digital trends, Scharff was asked what he feared most. He replied with a smile, “Two guys in a garage with a good idea”. His response partially refers to the way companies like Apple and Amazon – but also Google – started up.

But his answer is also based on the fact that users currently adopt new technologies with incredible speed. That’s why, with users so ready to embrace new technology, small start-ups can quickly have a major impact on development.

- This places heavy demands on the readiness of companies to change and represents a trend that is here to stay. The future will only continue to offer more rapid change and technological development, which is why we might as well get used to it, explains Scharff.

For an established company like Google it’s a question of how to avoid being one of the many examples of companies that suddenly get left behind due to unforeseen technology. In Google’s case, part of the solution involves launching numerous new projects that verge on science fiction. For example, balloons to provide wireless internet in isolated areas.

- It’s imperative that you dare to make mistakes to create new things and to be innovative. It’s just also highly essential that the mistakes aren’t always costly, adds Scharff.

- You have to have drive and ambition. Things happen so swiftly that if your dream is just to get into the industry you’ll be left in the dust by others. You have to want to achieve something to get in and you have to contribute with unique abilities, says Scharff.

He sees this enthusiasm when employees, for example, more often than at other companies, invite him to morning meetings or for coffee to hear his opinion.

- It’s been incredibly inspiring to see that I’m being approached by younger colleagues who see my experiences as something valuable they would like to learn from. They’re inquisitive and curious, and they are super talented, explains Scharff.

But this can-do spirit and high level of knowledge raise the bar for employees and managers.

- If you attend meetings at Google and zone out, you’ll quickly be eclipsed by others. You have to be on the ball every time because there’s so much brain power and an intense desire to deliver to users.

You must constantly compete against yourself – and others
Fortunately for Scharff continually developing and improving himself is a way of life. He comes from an especially creative family. At his own admission, however, he has butterfingers, which is why he’s always known that he would have to use his head creatively instead of his hands.

He describes himself as very creative and it shows in his approach to his career. Even when he was doing a BSc in Business, Language and Culture (formerly SPRØK) at CBS, Scharff thought about what he had to do to be ahead of the game once he graduated.

To that end, when he completed his bachelor’s degree, he took a job at a German company. After a short time he was head of the Nordic part of the company, where, at 24, he was responsible for turnover in the three-digit million DKK range and had to become accustomed to the culture in an old-fashioned, family-owned German company.

- I had to be at work every day by eight in the morning wearing a suit and tie no matter what. But that taught me how to do things properly, on time and in a professional manner. And I had to go above and beyond the call of duty compared to my colleagues because of my age, explained Scharff.

Even though the company tried to keep him, Scharff was determined to return to CBS to get his master’s degree. Because no one else in his family ever had done so. But the discipline and zeal of the German company had rubbed off on him, leaving him feeling restless with only studies. As a result, in collaboration with two other students, he started a company while working on his graduate degree.

The company still exists, but Scharff left after a few years to pursue other challenges, which led him to various jobs at TDC, where he worked for seven years and also completed an Executive MBA at CBS, in addition to a brief stint at Viasat before joining Google.

On the hunt for something new
About a year and a half ago, together with his wife, he decided that his career needed to take a new twist and that included going abroad.

He got in touch with Google and within a few months he was offered a position in Dublin. He has now been a boss at Google for six months, where the majority of his time is spent on management tasks and leading the business in the right direction.

He feels that the culture in the digital giant is vastly different from the companies he has previously worked for.

- Google is willing to change things all the time; the culture is unique in that way. The organisation is extremely flat and everyone is expected to talk to everyone else. A great deal of responsibility is put into the hands of the individual and people are expected to dig in and volunteer, as well as to use their network to constantly improve.

This environment means that Scharff has found a company he believes is a perfect fit for him. He is undeniably more than just happy to work for Google.

- My goal is what it’s always been, to see how far things can go. As long as no one says that I’ve reached my professional, mental or managerial limit then I’ll improve my skills, get more responsibility and have a greater impact on the organisation. My boss is well aware of this – and he expects it too, concludes Scharff.

Peter Scharff was interviewed in connection with the event "Digital Power" on 24 March, which was arranged by the CBS Career Centre and Marketing Lab. Stay informed about coming events through the CBS Alumni’s LinkedIn group and cbs.dk/alumni.