#IWillFightFor – equality and diversity in management

“#IWillFightFor (#JegVilKæmpeFor)… making sure that my children can explain the need for equality as nothing more than a historical triviality, when talking to their children.” This was just one of the many tweets from the large event with 500 participants at the International Women’s Day at CBS, which produced a shared manifesto about women and management. 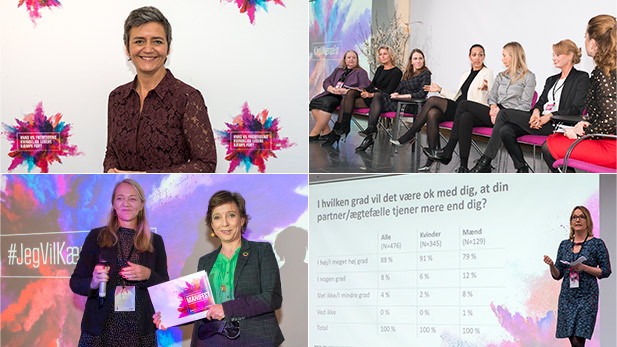 500 participants showed up for the CBS event at the International Women’s Day on Thursday, 8 March, ‘What will Danish female leaders fight for in the future?’, which was organized in cooperation with ‘Danish Women Business Leaders’. Female executives, many of them CBS alumnae, mixed with CBS students – and it should be mentioned that it was definitely not only women who had registered to participate.

The goal of the event was to discuss what both men and women could do to ensure equal career opportunities. But the event was more than just speeches, a panel debate and networking. The goal also was to compose a list of specific prioritizations, which were presented under the hashtag #JegVilKæmpeFor (#IWillFightFor).

The highlight of the afternoon was when the 500 participants joined forces in an enormous workshop and created a manifesto that was quickly edited, so that it could be presented to Minister for Equality Karen Ellemann by the end of the day.

#IWillFightFor … is there anything left to fight for?

In 2018, you would think that equality was a given. It is not. The manifesto was created on the backdrop of the fact that today, the outlooks for equality and diversity in management are not good, and according to the UN it will take 216 years before we reach actual equality – unless we do something radical about things.

To illustrate the problems, a study carried out by diversity researcher Sara Louise Muhr for CBS and The Danish Association of Managers and Executives in 2018 shows that not only power and gender structures, but also our unconscious cultural biases prevent more women from becoming leaders.

This means that we must still work actively to change the power and gender structures that retain women and men in stereotypical career and family patterns. Otherwise change will happen very slowly.

So how do you tackle the challenges? By fighting a battle on seven fronts and with a promise to ensure diversity in management by contributing to:

#IWillFightFor … staying on track and keeping others on track

The intentions were clearly stated. How the 500 participants more specifically expressed just how they would fight on the seven fronts can be read in the final manifest of the day.

The enthusiasm among the 500 participants was remarkable… and throughout the afternoon, the hashtag #JegVilKæmpeFor (#IWillFightFor) trended on Twitter with promises ranging from very specific statements to more strategic plans.

Read the results of diversity researcher Sara Louise Muhr’s survey of opinions on management, career, and equality here (in Danish)

Read the final manifest for the International Women’s Day at CBS on Thursday, 8 March 2018 (in Danish)

Read the programme for the International Women’s Day event at CBS on Thursday, 8 March 2018 (in Danish)