In your own words: Andrea Baccenetti, Co-founder & COO

In your own words: Susie A. Ruff, CEO and Senior Advisor

In your own words: Nels Mortensen, Senior Manager

In Your Own Words: Lisbet Andersen, Lawyer & Partner

Law classes in the International Trade diploma programme decided Lisbet Andersen's career choice. But her time at CBS also gave her important knowledge about communication that she uses often in the law profession. 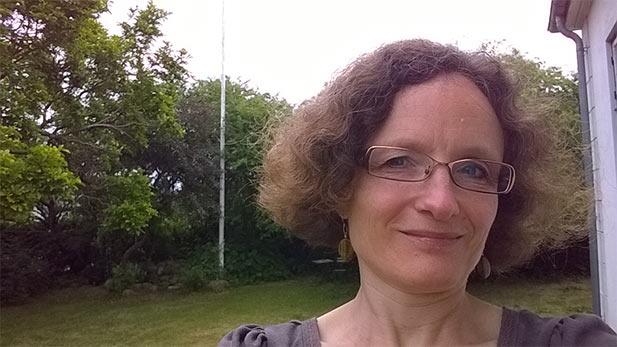 "The picture was taken in my garden one morning as I was leaving home. It is great to get some fresh air in the morning and I ride my bike to the station and take the train from there. My office is right by Strøget (the main pedestrian street in downtown Copenhagen) and it is faster to get there without a car" (private photo)

What were you like when you studied at CBS?
I was a diploma student of International Trade, as it was called back then. At the same time I also worked full-time in a company, which develops and sells machines for the food industry. As most other students in my programme, I came running from work to get to school in time, and I really did not have time to be a part of the student environment.  But it was a fun time. My favourite discipline was commercial law in the certificate programme (HD1) and after that international law in the diploma programme (HD2), where we were taught by the legendary Ole Lando. I was in fact so happy with the field of law, that I began to study law at the University of Copenhagen during the evenings. I was planning to become a corporate counsel, but then I was introduced to the world of law firms and stayed there.

How did you get your first job after graduating from CBS?
While I was doing my diploma studies I already had a job, so I did not have to search for a job when I graduated. The first new job I landed after my studies at CBS was as an advertising coordinator substitute at Novozymes, which back then still was part of Novo Nordisk and called Bioindustrial Group. It was a many-sided collaboration with manufacturing and mar-keting people, trade mark lawyers, advertising agencies and many others, so I learned a great deal.

Which moments in your career have been defining - and why?
I have experienced many great moments in my career, for instance when I started at Novo Nordisk, which is a great company. I would also like to mention the day I became entitled to appear before the Danish Supreme Court. That was quite something! So far, I have only handled a few cases before the Supreme Court and they were all to be settled in writing. But I hope to argue a case before the court someday. Another defining moment is when I started at Aumento Law Firm 18 months ago. Aumento is an office partnership, and I have become self-employed with all the freedom that it brings. I like the freedom, especially because my daughter has a horse, and that is very time-consuming.

What is the most valuable experience you gained at CBS that you still use in your daily work?
The most valuable experience that I have brought with me from CBS to the law profession is about communication and how important it is to put oneself in the shoes of the person re-ceiving your communication. As a lawyer with an internationally oriented area of expertise (intellectual property law), I communicate with a lot of different clients and colleagues in Denmark and abroad. If I, for instance, have to explain a legal problem to a small self-employed client, I make sure to make it short and accessible, while an internal lawyer in a large firm needs to know everything about all the provisions and details. The more targeted I am, the happier clients I get - and that is great marketing. Another significant experience I gained at my time at CBS and other companies, where I have worked, is that corporate ex-ecutives do not spend every waking hour thinking about legal issues. They have so much else to do, and you have to understand that. I am glad to have experienced both sides of the table.

Have you maintained a relation with CBS since you graduated?
Even though I graduated many years ago, I have managed to maintain my relation to CBS. I am part of CIBA (Copenhagen International Business Alumni) as deputy chairman of the board. CIBA has emerged from the International Business diploma programme. We meet regularly at events at CBS or company visits. In addition, I have become affiliated with CSE (Copenhagen School of Entrepreneurship) at CBS, where I offer legal advice to start-ups.

Relevant articles:
In your own words: Andrea Baccenetti, Co-founder & COO

In your own words: Susie A. Ruff, CEO and Senior Advisor

In your own words: Nels Mortensen, Senior Manager