Alumna Charlotte Wittenkamp believes strongly in networks. Active on Copenhagen Business School Alumni’s LinkedIn group, she takes part in numerous networks and otherwise helps others to ward off culture shock, something she experienced in 1998 when she suddenly accompanied her husband to California, where she still lives today. 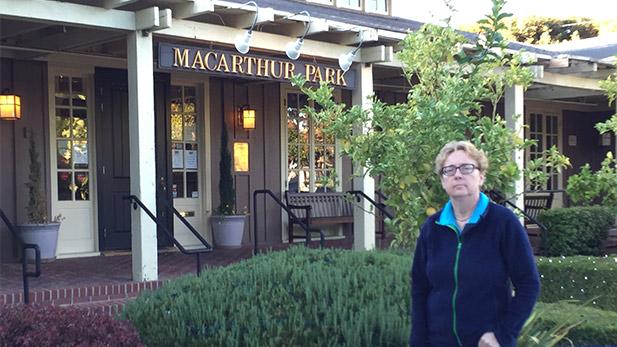 "The restaurant is home to the Danes Abroad Business Group Online Palo Alto's regular table, and visiting Danes are always welcome to participate - there are always people from Google, Facebook, ICDK or the many start-ups in the valley that you can talk shop with." (Photo: Private photo)

How did you get your first job after graduating from CBS?
Since I was doing a diploma in business economics and management (HD) I had already embarked on my career while I was studying. When I started upper secondary school in 1978 companies were still willing to train employees themselves. I was a trainee at the insurance company Baltica, where I also simultaneously did an insurance training programme, and in cooperation with IBM I did programming and system development. They had a fast track, where we did a four-year programme boiled down to two because there was a tremendous lack of qualified IT people – and I also did an HD on the side. It was truly on the job training. When I left Baltica in 1984, I was heading a group of nine programmers.

How would you describe yourself when you studied at CBS?
I worked full time while I was studying so I wasn’t especially involved in student life at CBS. But we had a good study and project group in the accounting programme. There were four of us and our jobs were in totally different areas. Combined we covered accounting, finance, IT and general economics.

This meant we respected that some group members had greater, detailed hands-on expertise than others, and, depending on the assignment, one of us could push the group forward. We gained practical insight into how small groups work and into delegating while reading about it. Thank you Lisbeth, Finn and André if you’re reading this!
When I was finished with Accounting a family member who’s an engineer asked if we should study Organisation together. When I initially chose to do the HD(R) specialisation I thought that HD(O) was wishy washy, but then I had a boss who had an HD(O) who really understood how to apply the material – so I ended up back at Julius Thomsens Plads again.

I wanted to know what he knew. I specialised in Strategy and Planning, which has served me incredibly well, especially when we did organisational development projects later on.

Organisational Development was so exiting that when I suddenly found myself in the US without a work permit years later, I decided to do a Master’s degree in the field. It didn't turn out quite as planned as American organisational "development" more often deals with eliminating headcount rather than training and getting more valuable employees.

What was the most valuable experience you gained at CBS that you still use in your daily work?
Learning how to speak math. Statistics has really served me well. The press contains an incredible amount of statistics that are just utter rubbish. Being able to critically analyse what you run into is important.

What moments in your career have been defining and why?
My career has had two pivotal changes, one from IT to accounting and the other from accounting to psychology. I did finance systems in my first job and enjoyed simultaneously doing my degree at CBS but I wanted to be on the other side of the table and work with accounting.

That led me to the telephone manufacturer Storno, which was acquired a short time later by Motorola. When my position was later moved to Germany, I ended up at the insurance company Alm. Brand, where for ten years I, put informally, ran what in most companies is known as Financial Planning and Analysis and was involved in various organisational development projects.

It was an even bigger jump when I moved abroad. My husband was the co-founder of a start-up headquartered in Palo Alto so we thought we should at least be on the same continent. The company was later sold to Ericsson but we stayed on in the US.

I went through an identity crisis both in terms of culture shock and because I suddenly wasn’t allowed to work. But I spent my time studying Industrial/Organizational psychology which was actually an old dream of mine.

And growing internationalisation means that more and more people are exposed to living and working in a foreign culture.

When being stationed abroad doesn’t work, it costs companies a fortune in direct costs, but even more in lost opportunity costs when the employee doesn't function optimally.

Have you kept in contact with CBS since graduating?
I’m active in the Copenhagen Business School Alumni’s LinkedIn group. I’ve gotten a lot out of being in various international networks, where people happily share articles and knowledge relevant to the focus of the network in question – because we can’t all read everything on the internet.

So, based on the assumption that not everyone in Denmark reads the New York Times, and that once in a while something happens in Silicon Valley that might be of interest to my fellow alumni, I pass on what a stumble across.

I’ve worked a bit with a couple of CBS professors to weed out Danishisms in their texts when they get translated. Other nationalities aren’t familiar with, for example, the Danish educational system, our labour laws or the Danish companies behind case descriptions. But otherwise I’m far from CBS on a daily basis and haven’t physically been there for years.

I think that it’s important to contribute to the community with whatever you can. That’s the basic approach taken by Danes Abroad Business Group Online (DABGO), where I host the organisation’s monthly meeting in Palo Alto. And “pay it forward” is a widely held philosophy in Silicon Valley. Although President Obama was criticised for his "You didn't build that" speech, he was right: None of us have accomplished anything without the help of others.