In September, one of the oldest alumni networks at CBS can look back on 40 years of networking, study trips and company visits. What started off as a chance to sit down for a chat with former classmates has today become a finely tuned network focusing on international business. 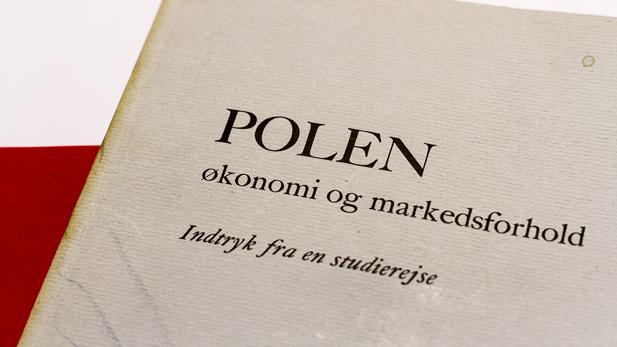 In October 1964, 25 foreign commerce Diploma students and their teachers were granted permission to visit Poland, which at the time was firmly situated behind the Iron Curtain.  The study trip was meant to give the students insight and knowledge into the country’s commerce and economy.  Ole Wiberg was a new Diploma student who was lucky enough to be granted permission to go on the east-bound trip despite the fact that it was meant for students who were further along in their programme.

- Today you can hardly imagine how insane the thought of taking a two-week trip to Poland, a country that was completely closed off then, really was.  But we managed to visit almost all the larger cities in the country, and it was a fantastic trip for us all both academically and socially, says Ole Wiberg some 50 years later.

Today, he is Chairman of Stipendiefonden for students at Copenhagen Business School, and has for many years worked at and for CBS, i.e. as Programme Director of the Diploma programme and as director of FUHU (Foreningen til Unge Handelsmænds Uddannelse), now DSEB (Danish Society for Education and Business).

When the trip was over, Ole Wiberg was charged with writing a report based on the information gathered by the students during the trip.

- So you can say, that the reason for CIBA’s existence lies in the palm of my hand, says Ole Wiberg and points to the 50 year old report.

Fun and games
In 1975, the team of Diploma students gathered at a large party to celebrate the 10-year anniversary of their graduation. An event which sparked the idea to promote the fellowship that had arisen during the trip to Poland.

- A suggestion was put forward to meet again and to include others instead of just keeping it to ourselves.  Over the course of the summer and early autumn, that became Udenrigshandelsklubben (the foreign commerce club), says Ole Wiberg.

Flemming Fischer was elected as the first chairman of Udenrigshandelsklubben.  He was the director of the first venture capital company in Denmark, Incentive A/S, and went on to work in many different positions around the world, until returning to Denmark eighteen months ago.

- The contact with the colleagues and the university that I got through Udenrigshandelsklubben has meant a lot to me.  I have met with many members of the club over the years, just not within the actual club because I lived abroad.  We have met privately and professionally, and it has been very nice to bump into old colleagues at business meetings around the world, says Flemming Fischer.

The core of Udenrigshandelsklubben was meetings and in particular company visits, where members of the club could attend lectures about a company and ask questions.  But the basic approach to meeting in a professional network was somewhat different in the middle of the 1970’s than in 2015, reports Ole Wiberg.

- We did not have this networking approach back then.  It was fun and games, where we had fun and talked about old times and had a bit of a go at the teachers.  We were aware of the fact that if we suddenly found ourselves without a job, then we could call some of the others in the network and ask for help, but it was not more formalised than that.

From club to network
As the years passed, the networking part became increasingly formalised, and Udenrigshandelsklubben changed its name to the more international Copenhagen International Business Alumni, or CIBA for short.  In her capacity as Chairwoman of CIBA in the late nineties to the mid noughts, Tina Bremholm had a part in that change.

- As more and more attention was put on how important having a good network is and in so many different contexts, we worked on creating a broad and dynamic network and recruiting new graduates each year, says Tina Bremholm and continues:

- We used a lot of resources on arranging interesting member trips to companies, where different topics and industries were debated, so that being a member yielded something both professionally and personally.

She left CIBA ten years ago when she started her own business designing, developing and producing home interior products. She remembers CIBA as a fantastic network, and her early experiences of getting help and sparring from established professionals sparked her wish to pay it forward.

- To me, the most important thing was being able to help each other with contacts and skills, so that 2+2 always added up to more than 4, says Tina Bremholm.

Continuity
In September CIBA celebrates both its 40-year anniversary and also that the network is alive and well with over 200 active members, a large group of followers placed abroad and not least the CIBA LinkedIn group, which boasts over 600 members.

Although CIBA has become a more modern network, many of the activities in the network remain the same.  The combination of academic and social interaction is still the foundation, and the company visits remain part of the network’s activities.

However, the programme has evolved and now includes events focusing on personal career development and lectures from CBS and other education institutions, which keeps the members updated on new, relevant research and trends from the world of academia.

CIBA’s long history has helped give the network a unique authority, believes Karin Rytz, who is Vice Chairman of CIBA today.

- It is incredibly important for a network to have both continuity and history.  It creates a value that you cannot emulate in a brand new network.  And people know who we are, when we e.g. ask for permission to visit a company.  That also means a lot, says Karin Rytz.

She is an entrepreneur and joined CIBA when she came back to Denmark after having worked in Germany for several years. For her, CIBA has been a fantastic way to build a network after the years spent abroad.

- I converted my own need for a network to include doing things for others and sitting on a board.  I have not regretted that decision, because it is very inspiring to meet like-minded people who all have an interest in international business, says Karin Rytz.

The future
To the founders of Udenrigshandelsklubben such as Flemming Fischer and Ole Wiberg, who are honorary members of CIBA today, it is impressive and a little surprising that the network still exists.

- I look forward to meeting the current members of CIBA and congratulating them on what they have been able to create. It is a bit of a surprise to me that an idea can survive for as long as it has.  It must be because they were able to keep the core concept while adapting it as needed, says Flemming Fischer, and Ole Wiberg agrees:

- I never thought that our club would survive for as long as it has. But I now believe that CIBA will be able to celebrate its 50-year anniversary - at least.  It has been an immense joy to me to be able to be a part of such a project and to see that it still exists thanks to the driving forces that have joined along the way, says Ole Wiberg.

To Karin Rytz, who is one of the driving forces today, there is no doubt that CIBA will continue surviving and doing well.

- The activity in CIBA is amazingly high.  We visit companies that are very interested in getting visits from us because they want our input.  And it will always be important to be able to help each other in a network.  Relations spur growth and new ideas, and I think that will be the same in the future, says Karin Rytz.