On International Women’s Day, CBS in cooperation with KVINFO, introduced the innovative GenderLAB to find new solutions to gender equality problems. On 2 April, you can take part in finding the solutions at the next GenderLAB at the Nordic Gender Equality Workshops. 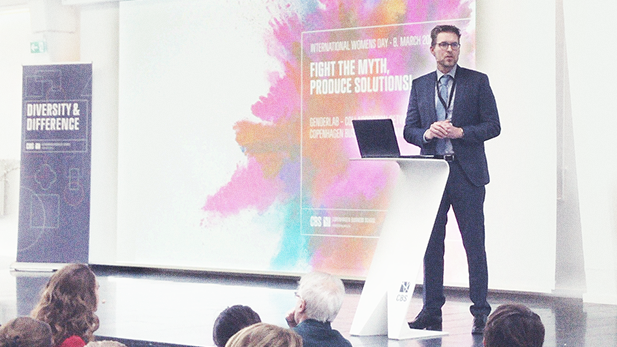 Successful International Women’s Day at CBS: Fighting the myth, producing solutions!
In Denmark, there are many myths about gender equality: “Organisations have no gendered norms” and “We are always hiring the best qualified candidates regardless of gender” are statements frequently uttered in Danish organisations. However, research has repeatedly proven all of these myths to be wrong. Hidden gender norms, unconscious bias, and gendered assumptions still influence organisational life, from hiring over everyday practices to promotion and leadership. But how can this knowledge on gender be put into practice to fight the equality myths in the Danish labour market?

The answer: a GenderLAB. At the International Women’s Day last week, CBS brought together more than 300 people to work on important problems in the area of gender equality in a so-called GenderLAB. The GenderLAB was developed in cooperation between KVINFO and CBS researchers from the Diversity and Difference platform. It uniquely combines design thinking approaches, which are often used in innovation work, with norm-critical methods, that allow to challenge commonly held assumptions and reveal hidden norms, unconscious bias, and invisible power structures.

As the International Women’s Day event showed, even a country like Denmark, often seen as a role model for gender equality, still has a lot to work on. But luckily, it also demonstrated that students, public and private organization leaders, academics, and political representatives can join forces to start creating solutions to these problems. On 8 March alone, a huge variety of different solution ideas were developed and presented, such as unconscious bias and gender awareness training, proposals for more flexible career ladder structures, and public funding initiatives that tie governmental funds to gender balance criteria.

Co-creating Gender Equality in the Nordics: Expanding the GenderLAB in Denmark, Sweden and Finland
This is just the beginning. After the success with the first GenderLAB, CBS and KVINFO will introduce it in Sweden and Finland as well. CBS started a collaboration with KTH Royal Institute of Technology Stockholm and Hanken School of Economics (GODESS Institute) to continuously work for gender equality in the Nordics.

In three workshops to be held in Copenhagen, Stockholm, and Helsinki in April 2019, the universities will bring together business and academic leaders, educators, managers, students, volunteers, NGOs, educational institutions, and youth/student organisations, for a co-creative GenderLAB workshop. Jointly, the participants will develop new knowledge, practices, tools, and ideas for gender equality work. Learn more and sign up for the workshop in Copenhagen on 2 April 2019.

From Workshop to Action: Innovations in Nordic Welfare Societies
One of the great advantages of the GenderLAB is that the solutions developed are not just replicating what is already known but provide novel approaches to real problems. For the workshop in Copenhagen on 2 April, participants will work with real-life cases to discuss three interrelated topics, all of which are relevant and topical in Denmark and the Nordics:

Additionally, the group will reflect on how to adapt the discussed solutions to other contexts and learn which tools, approaches, and methods work in which settings. Coming out of the workshop, all participants will know how to take better action for more gender equality in their own organizations and work environment.

Sign up now for the Nordic Gender Equality workshop

As seats are limited, we recommended you to sign up as soon as possible.