Six Norwegian graduates made an anniversary visit to CBS in early June, 50 years after they started the BSc in Economics and Business Administration program in Copenhagen. CBS not only offered the Norwegian guests coffee, a slide show and a tour, but also a selection of eye-openers. 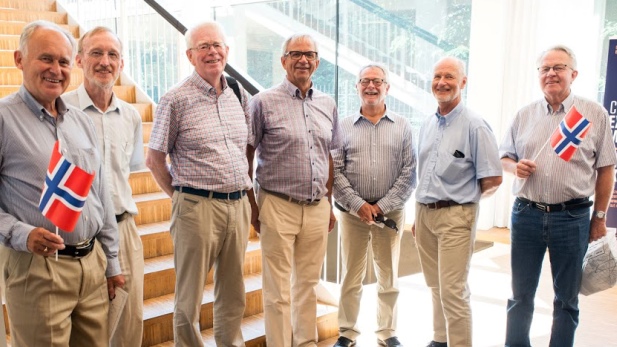 CBS’ long-standing importance as a Norwegian ‘Alma Mater' cannot be denied. The role goes back many years, and young Norwegian men and women have for many years made up Copenhagen Business School’s largest single group of foreign students – this even long before anyone ever started talking about internationalization.

CBS has by now delivered at least four generations of graduates to the Norwegian business community, and at CBS Norwegians are notorious for being Nordic champions at staying in touch with their old classmates  – and they have  been so long before anyone ever started talking about alumni, networking and professional networks.

So the visit in early June by six Norwegians, who 50 years earlier had started on the BSc in Economics and Business Administration program in Copenhagen, was not the first Norwegian 50 year study start or graduation anniversary visit, CBS has hosted.

Impressed with CBS’ development since 1966
The circle of friends, which actually consists of seven Norwegian graduates, has visited CBS twice before over the past 50 years, but “never with such a professional reception as this”. Harald Aase, Kjell Tunge, Vidar Helgeland, Ivar Castberg, Stein Devik and Lars Kleivan, who all graduated from Copenhagen Business School in 1969, were met by Danish and Norwegian flags and offered breakfast by representatives from CBS Alumni.

The host of the historical presentation of CBS’ development over the years and guide for the subsequent tour was former Dean of CBS’ Economics Faculty, Jens Aaris Thisted. Throughout the presentation, the guests weighed in with comments about Julius Thomsens Plads, where CBS was located 50 years ago, and their memories of different professors.

The most strongly rooted memory, however, was that you could buy beer in the canteen and actually enjoy  a beer with your lunch.

The six Norwegians were very impressed by CBS’ current statistics and credentials: the sheer number of students, CBS’ broad academic and professional scope and many study programs, the international outlook and collaborations as well as all the accreditations, including CBS’ ‘Triple Crown’ accreditation.

“It's a little funny to think that we were the ones who were not good enough to get into Bergen (BI Norwegian Business School) and therefore had to go to Copenhagen to take our BSc. And today we are the graduates of the internationally most prestigious and recognized business school”, remarked one of the guests.

Still strongly student oriented after 50 years
CBS’ architecture and facilities and the extended campus on Frederiksberg impressed the Norwegians during the subsequent tour. Especially noteworthy was CBS Library, which gave rise to comments about the somewhat more meagre services and facilities, the 50 year anniversarians were treated to in the library on Julius Thomsens Plads, where the books could not be removed from the library.

The projected CBS Student & Innovation House in the disused Frederiksberg Police Station was also afforded respect and appreciative nods to the student ownership and successful fundraising effort. Generally the visitors expressed great interest in hearing about CBS’ multitude of student organizations and their many social and academic activities. Also on this front, Norwegian students have longstanding traditions.

Of relevance to Norwegian CBS students in 2016 you will find both the 60-year-old organization for Norwegian students abroad, ANSA, as well as the student initiative NNU (Norsk Næringslivsutvalg), the Facebook group 'Norwegian students at CBS' and still active HA Invest.

The investment fund HA Invest was particularly interesting for the six Norwegian guests, as they and the other Norwegian students established this while studying at Copenhagen Business School in 1966 – something they all learned a lot from. At that time a full share was set at 500 DKK – today, after 50 years of ups and downs, a full share has a value of approximately 80,000 DKK.

Purely a circle of friends – with professional benefits
The seven Norwegian BSc graduates stuck together and followed each other closely through both life and careers for 50 years up till today, where all but one of them are retired. Through the many years they have kept in touch, even arranging monthly dinners for those of them who lived close enough to each other to do so.

When the conversation turned to alumni groups and professional networking, the immediate response was that they actually just regarded themselves as a social network, a circle of friends. But directly asked just who, then, were the first they called when confronted by something in the one of the others’ professional scope and expertise, they had to acknowledge:

- Yeah – we probably cannot completely escape the fact that it has been a valuable professional network through our careers too.

It pays to stick together. CBS was proud to host this visit from the six Norwegian CBS BSc-anniversarians. They are:

Harald Aase (73). Retired.  Accountant education from BI Bergen. Accountant with Price Waterhouse & Co. for 6 years, then independent accountant for another 6-7 years. Career as a business consultant in the bank sector, primarily for Nordea, for 29 years.

Kjell B. Tunge(72). Retired. Management positions in Norwegian companies such as Statoil, Norsk Hydro and Aker Geco and Federal Commerce and Navigation. Worked with development and large offshore projects in oil and gas companies for the last 35 years and has delivered solutions for ABB and Dong at the power plant Mongstad as an independent consultant.

Ivar Castberg (71). Retired, active environmentalist. Career primarily in the production and technical service, sales management and financial management. Has been CFO of Norwegian Elektrisk Kabelfabrikk AS, CEO in Hedmark Maskin AS and CFO of Sao Hill Sawmill in NORAD / Tanzania.

Stein Devik (71). Retired. Director in Porsgrunds Porselænsfabrik AS and David-Andersen AS through approximately 30 years. Consultancy and Board work in the culture and business fields . Taking a Master in Cultural Studies at HSN (University College of South-East Norway).

Vidar Helgeland (71). Retired. Worked most of his career in companies that are completely or partly state-owned. First as an employee and Business Manager and the last 25 years before his retirement as a Director for Economy and Finance in Den Norske industribank, Statens Nærings- og Distriktudviklingsfond and Innovasjon Norge. He has also been a board member in the energy sector and in charitable organisations, among others.

Relevant articles:
From a study trip behind the Iron Curtain to 40 years of networking