The book ‘The Danish Pension System: Design, Performance and Challenges’ has been published by Oxford University Press

The book ‘The Danish Pension System: Design, Performance and Challenges’, co-authored and co-edited by PeRCent Directors Svend E. Hougaard Jensen and Jesper Rangvid, along with Chairman of the PeRCent Advisory Board Torben M. Andersen, has been published by Oxford University Press.

The book is a joint collaboration between several PeRCent members and other colleagues, who made their contributions as either authors (or co-authors) of the book’s nine chapters:

In addition, many others have also made their mark through inspiring conversations – not least the members of PeRCent’s Advisory Board and others who support PeRCent’s research.

Each chapter has been reviewed by Danish and foreign experts in the field.

See here, for more information about the book. 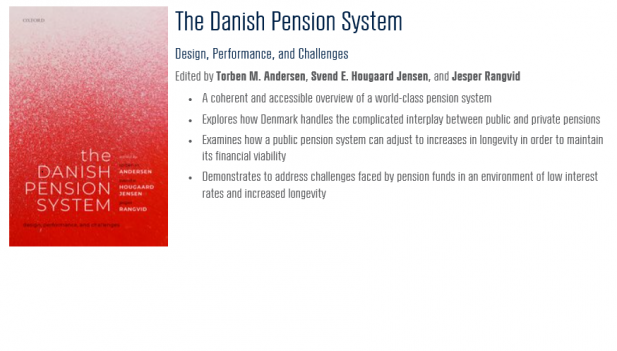