Researchers, staff and students have joined forces and created a Task Force on the Sustainable Development Goals. They want to implement the UN SDGs on campus. 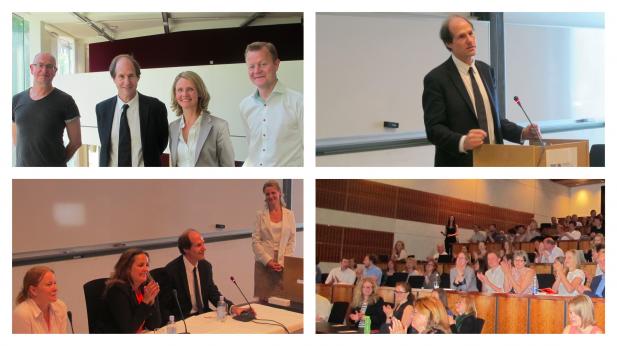 CBS Sustainability Platform, in collaboration with the Public-Private Platform, had the pleasure of inviting Harvard University Professor, Cass Sunstein, for a two-day visit to CBS on June 5-6. Sunstein is working closely with CBS Professor Lucia Reisch, ICM, who was instrumental in organizing this event. During his visit, Professor Sunstein met with high-level civil servants from Danish government, private sector representatives, CBS faculty, and CBS students to talk about nudging and empirically informed regulation.

Professor Sunstein’s talks evolved around four topics for simple government and nudging: Regulatory moneyball which means that regulation should be based on statistical data rather than on human intuition; Behavioral market failures was another term discussed by Sunstein, which refers to behavioral biases people have and heuristics people use - hence systematic decision "failures"; Choice architecture is an incentive to steer people towards healthier and more environmentally friendly choices. Examples could be placing healthy food next to the check-out desk in cafeterias or setting the default print choice to double sided; The fourth topic referred to libertarian paternalism, which tries to influence choices in a way that will make choosers better off, as judged by themselves – however, choices should always be presented in a way that allows for ‘opting out’.

Professor Sunstein was administrator of the White House Office of Information and Regulatory Affairs during President Barack Obama’s first term in office. He is the most cited living law professor.