In Your Own Words: Nels Mortensen, Senior Manager

It was actually a coincidence that Nels Mortensen began studying at CBS. But with a certain amount of stubbornness and a structured approach, he managed to complete his programme and after graduation quickly secured a job in a job market that was otherwise under pressure. 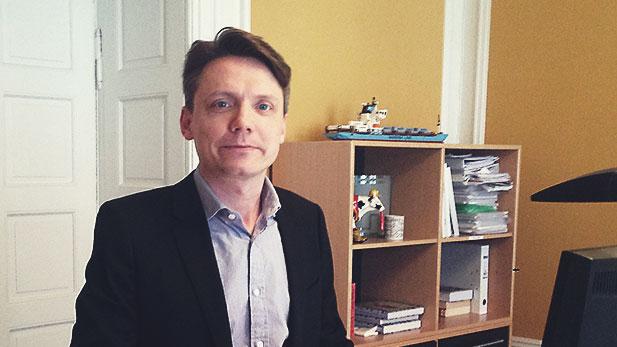 “The photo has been taken at our office in downtown Copenhagen. It is important to us to be on site with our customers, so 95 % of the time we are at their location. So it is actually rare that we are at the office.” (Photo: private photo)

What were you like when you studied at CBS?
I was probably a fairly average student. Back in 1996, following a gap year after high school, it was more or less a coincidence that I started studying BSc in Economics and Business Administration because one of my friends was starting there. The first couple of years were difficult to get through and many of my fellow students dropped out. But I have always believed that what I start, I should finish. I ended up with an acceptable result without it being excellent.

After completing my Bachelor’s degree I chose to begin the MSc in Economics and Business Administration right away, in what was then a new specialization, Applied Economics and Finance (AEF). I chose that specialization as I was interested in the finance part while not liking accounting so much, and therefore, Finance and Accounting was not an obvious choice for me. Furthermore, AEF was taught exclusively in English – with many international students – which also gave the programme an international profile, which attracted me.

It was exciting but a little chaotic to start a completely new line of study and it took me some time before everything fell into place. I completed my MSc in 2001 with my thesis, “The Use of Real Options Valuation in the Aircraft Maintenance Industry,” which coincidentally happened to be handed in on 11 September 2001.

How did you land your first job after graduating from CBS?
Even before graduating, I started as a student assistant in a finance department in a larger Danish industrial group. I was offered the job in connection with writing my Bachelor’s thesis for the company. When I graduated, I continued in the same department.

It definitely was an advantage for me as the job market at that time was somewhat difficult to get into for recent graduates. In addition, I was given the opportunity to employ some of the theories we learned at CBS in practice – and things gave more meaning when you had them concretized. After 4 years in the finance department, where I, among other things, was responsible for the financial systems we used, I started as a consultant in a company which helps financial companies to choose, implement, and optimize their financial systems and processes.

After a two-year detour in the banking industry, I am still with that company today. It means that I have seen the business from several perspectives – corporate, banking, and advising – which I believe gives me an all-round understanding of the financial daily life that our customers operate in.

What is the most valuable experience you gained at CBS that you still use in your daily work?
I have always worked in very analytical and structured ways which was a precondition for getting things done in what was sometimes a chaotic time of studying. Group work at the programme taught me to work in teams with individuals who can be of a very different mindset than oneself – and from a different culture. Furthermore, I obviously also gained a professional understanding of my field, which I, now 15 years later, still draw on.

Which moments in your career have been defining – and why?
In 2010 I was offered a three-year position in Sydney, Australia. It was not the best moment as we had just bought a house and I was actually happy in the job I already had. But it was a chance we could not say no to –we did not want to look back 10 years later and regret not doing it. So I went with my wife and two children to live in Sydney – one of the world’s best (and most expensive, we realized!) cities to live in. It was a great experience but also rough, especially during the first time there. Professionally, it was an exciting challenge to work in a completely different work culture than what I was used to. Australians are more laid-back and relaxed – sometimes a bit too relaxed for a structured Scandinavian like me. But after returning to Denmark, I have also drawn on these experiences, e.g. the informal meetings called “catch ups,” that do not require a specific occasion but where you just meet over a cup of coffee.

People normally say it takes two years to settle down in a new place and then you have to either go home again – or stay. All along, it was our intention to stay for three years, so we chose to return to Denmark, mostly because we wanted to be closer to family and friends. If we had stayed longer, we probably would not have returned. We met several Danes who had been in Australia for 10-20-25 years, even though they had planned only to stay a couple of years.

Have you maintained a relation to CBS since you graduated – and if yes, how?
Even though I wanted it differently, my contact with CBS has been very limited since my graduation. But a couple of years ago, I made use of the opportunity to take a single course in theory of obligations, to upgrade my knowledge on the subject.

Furthermore, I am still on LinkedIn with most of my fellow students – it is exciting to follow their careers on the sidelines, and you never know when you need your network. I was on LinkedIn early – among the first in Denmark – and I use it very actively in my work. It has not been until recent years that it has come to my attention that there is an active alumni group for CBS, and that is definitely something I will try to engage in in the future.