In Your Own Words: Jakob Haldor Topsøe, Chairman, Partner, and Co-founder

When Jakob Haldor Topsøe began studying at CBS, he did not expect a deep involvement in the company founded by his grandfather. But now he is chairman of the board in Haldor Topsøe's holding company. A student position ended up being crucial to his studies and future career. 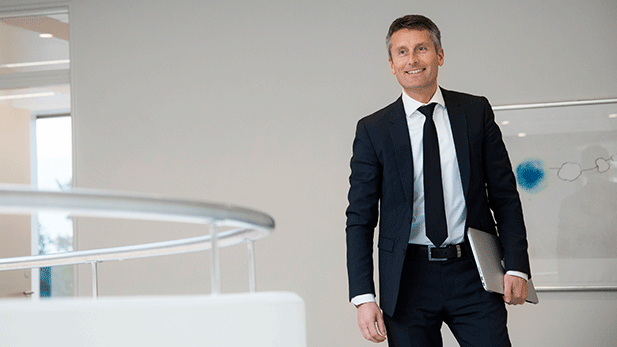 Jakob Topsøe has chosen not to have his own office at Haldor Topsøe´s headquarters in Lyngby, because he prefers to be with the staff and in that way move around in the company. That is why the laptop is an indispensable tool. (Photo: Jacob Ljørring)

What were you like when you studied at CBS?
I started studying BSc EBA. Initially, I was not quite sure where I was going and on top of that, I was absent for more than a month after catching severe mononucleosis. At the end of my first year, I landed a student position at Hafnia Kapitalbank, and when they offered me a full-time position, I transferred my credits to another programme - the Diploma Programme in Finance. So I went from having very little academic direction and a large focus on the social aspects to being extremely determined. It became clear to me, that studying Finance would be the right choice, and I was able to relate a great deal of my studies directly to my job, which felt amazing. But they were tough years, too.

How did you get your first job after graduating from CBS?
As many people remember, Hafnia collapsed completely. My former boss was appointed head of Alfred Berg Investment Management, and he hired me for what was the leading investment bank in the Nordic area at that time.

Which moments in your career have been defining - and why?
The most defining moments of my career have not been concrete achievements, but moments where the choices that I have made have brought me in a certain direction. Every time I have made such a decision it has felt like jumping into the deep end, but it has helped define my career and me as a person. Three choices in particular come to mind:

After a few years at Alfred Berg, I was offered the possibility of changing from investment management to stockbroking. Some people found it to be a bad idea, but I felt certain. And it turned out to be the right choice. It may seem trivial to those who are not familiar with investment banking - but "buy" and "sell” side are worlds apart in the industry. I was taught independent responsibility while also being part of a team in an extremely dynamic and demanding environment.

In 2008, ABN Amro Bank was sold to a consortium led by the Royal Bank of Scotland and a number of activities were closed down in Denmark, including equities, which I was in charge of at the time. I could have stayed with RBS in London or found a job elsewhere, which would be ”more of the same”. Instead I teamed up with two colleagues back from ABN Amro - Torben Helstrup and Nils Lorenzen - and we decided to start our own little "Investment Banking Boutique" - AMBROX Capital. It is safe to say that being an entrepreneur is quite different from working in a huge company with more than 100,000 employees, but we have been successful, and it has been fun and very educational.

Last, but not least, I am going to emphasise my board duties at Haldor Topsøe. When I started at CBS, I had not imagined a deep involvement in the family company, but today I spend most of my time working with Topsøe.

What is the most valuable experience you gained at CBS that you still use in your daily work?
It is difficult to give a precise answer, but to use various disciplines when looking at a problem and solving it is one of them. It is seldom a simple matter. You need the ability to combine economics, finance, risk assessment, law, governance, and the like methodically. And the ability to use your common sense. At the lectures held by Professor Michael Møller, we spent just as much time discussing common sense as discussing financial theory. You cannot have too much common sense.

Have you maintained a relation with CBS since you graduated – and if yes, how?
Many colleagues, collaborative partners, and clients throughout the years are graduates from CBS, so I interact with CBS people every day. However, I do not see many people from back then. My wife is also a CBS graduate (MSc EBA); however, we did not meet each other at CBS.

Read more "In Your Own Words":