CBS alumni - by the numbers

No one knows CBS better than its alumni. This is why CBS needs them to help develop its programmes and to create closer ties to the business community. President of CBS Per Holten-Andersen envisions a future where alumni study throughout their careers and have easy access to knowledge from CBS. 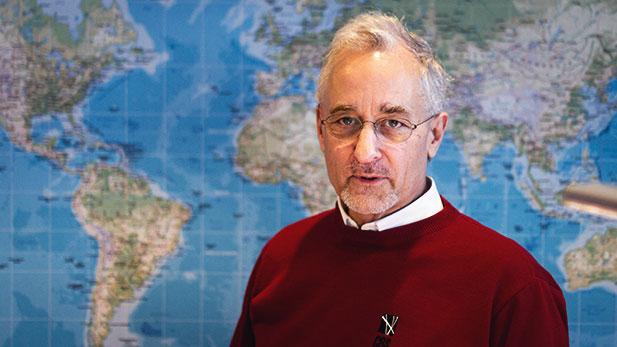 President Per Holten-Andersen has a high opinion of alumni and big dreams for them. The alumni effort is one of the most important aspects of his job as president and he has no doubts about the point of CBS’s venture in the alumni area. Ultimately, the goal is to develop CBS’ impact in contributing as much as possible to Danish society. In order to do so, however, CBS must get closer to its alumni and offer them knowledge in completely new ways.

- Alumni have an academic background and they’re well-positioned in business and industry. This means that they can help to develop our programmes, collaborate with business and industry and speak up for us. That’s why I see the alumni relation as one of the three most important aspects of my work, says Holten-Andersen.

Development, collaboration and supporters
Consequently, alumni can play an important role as CBS works to improve its main focus: providing graduates for the public and private sector. Alumni are in a position to evaluate the positive and negative aspects of their education and how well it prepared them for their careers.

- Nobody has a clearer picture of this. We don’t; business and industry don’t. And in my opinion it’s pretty amazing that in the Danish university world not a single university focuses on alumni as a part of improving the quality and content of its programmes, adds Holten-Andersen.

Alumni can also simultaneously work as a link between CBS and the business community to create greater collaboration between two obvious partners.

- I actually think that closer collaboration between the business community and universities has tremendous competitive potential for Denmark – much more than we utilise today. And alumni represent a link in that collaboration because they have a foot in both camps, explains Holten-Andersen.

- The third aspect is the social side – by which I mean maintaining contact between CBS and alumni to build coherence. After all, we have more than 70,000 graduates active in business and industry who earned their degrees at CBS. That represents a huge force. And I certainly hope that they campaign for CBS if they feel we have provided them with a good education that they would like to add on to. Of course we also toot our own horn but we are biased, which means that having alumni advocate for CBS from their position is much more useful.

Quick praise
Closer collaboration does not occur on its own and requires a close relationship to be fruitful. As a result the president’s goal is to create a closer relationship to alumni and to business and industry.

- I’d like alumni to be able to provide positive criticism that pushes us to continually develop and innovate our degree programmes and teaching. Alumni currently generally praise CBS when I run into them. But that’s perhaps because the people with something less positive to say don’t come up to me and say hello, comments Holten-Andersen.

He thinks that an approach that rests on quick praise reflects a somewhat superficial, unestablished relationship, illustrating this with the example of a first-time dinner guest, who wouldn’t start by criticising the food.

- The people you know really well in your life have license to criticise you. And, in reality, that’s something that helps you more than anything else because not many people have the courage to do so. That’s the kind of relationship I’d like to have with alumni – that they know us so well that they aren’t afraid to say something unflattering.

Over the past couple of years Holten-Andersen has visited thirty of the businesses that hire the most CBS graduates. And he has a rule that they are more than welcome to spend a minute talking about what is good about CBS, but he would particularly like to hear about what CBS does less well.

- It’s not because I get particular pleasure from hearing critical comments, but praise alone doesn’t lead to development and it’s my job to ensure that CBS advances and improves. I know that close relationships don’t just happen on their own. They require long-term social investment and building relationships in the form of mutual loyalty and information sharing, for example at social and professional events and continuing education and further training, not to mention other types of involvement and opportunities for alumni.

Knowledge close at hand
Even though the president of CBS inherently has a strong interest in identifying what can benefit CBS, he is also highly aware of what CBS can do for alumni. He has a specific dream of making it possible for CBS to help its alumni develop throughout their careers.

- My degree programme didn’t have especially many students. It was wonderful because any time you didn’t understand something even though you’d reread the chapter, you could just go up to teachers and ask them to spend ten minutes explaining it.

But after he graduated, the distance between asking a quick question about how something fits together or how to solve a problem grew.

- I was personally quite surprised at how great that distance becomes within six months to a year after graduation. In the beginning you can contact your teacher to ask how to learn more about a topic, but you can’t continue to do that the rest of your life.

Consequently, Holten-Andersen dreams of a day when CBS can erase the line between students and alumni. Alumni must be able to access knowledge at CBS quickly and easily without spending an inordinate amount of time finding a specific formula or method to optimise their work.

- My ultimate vision is for us to provide education differently than we do today, where we run you through the machinery in the space of five years and then don’t hear from you again. It would have an enormous effect on Danish competitiveness and knowledge generation if all of our alumni could find the tools or knowledge they need at CBS within ten minutes instead of spending weeks trying to find a solution. My hope is that we can help develop this.

Although no specific projects currently exist to begin turning this dream into reality, Holten-Andersen points out that CBS investments in IT-based education can help meet this goal.

Life-long student
The idea of being able to access knowledge from CBS throughout one’s career sets the stage for giving alumni a different role than they have today. Holten-Andersen would in fact like it if alumni saw themselves as students instead.

- A closer relationship points to a future where you’re a student throughout life. It’s a question of both working and studying over the course of your career. Many companies make an effort to develop this approach internally, partially due to business secrets, but also because universities do not fill all of their knowledge needs.

- Quick access to up-to-date, innovative knowledge represents an opportunity for Denmark’s future competitiveness. That’s why I’d like to see us stop dividing students and alumni up. Hopefully we can get to a point where it doesn’t make sense to talk about 22,000 students at CBS and over 70,000 alumni – but instead about almost 100,000 students beneficially connected to CBS in various ways.

- We need you in order to make CBS even stronger in the future, and the crux of the matter is knowledge. You posses the insight, concern and understanding to criticise us and make us even better.